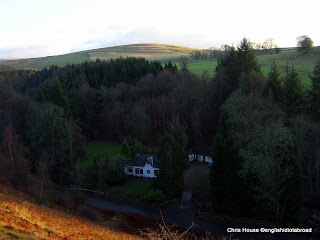 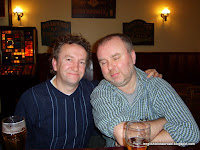 I started my foray into the beautiful country north of the border with a visit to my old mate Chris. He lives in Hawick, which is a handy first stop being slap bang in the centre of the Scottish borders, and Chris likes to drink lots of beer like I do! 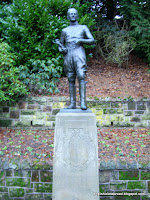 Hawick's most famous son of years gone by was Jimmie Guthrie. Born there in 1897 he started as a dispatch rider in France during the great war and joined Hawick Motorcycle Club on returning. They entered him into his first TT in 1923 and the rest is history, as they say.

This statue was erected in his honour in Wilton Lodge Park by the river in Hawick next to the museum where there is an exhibition featuring some of his race bikes and trophies. There is a list of his major wins in TT, Northern Island road races and countless 350 and 500cc GP`s and six titles in Europe - nearly 50 wins in all! Sadly, he fatally crashed whilst leading the European GP in Germany at the age of 40. The funeral procession in Hawick stretched for three miles. There are other memorials to Jimmie Guthrie: the Guthrie Stone at the Sachsenring, where he died, and another at the roadside spot, The Cutting, where he retired in his last Senior TT.

Another great motorcycle racer from Hawick, and one closer to my heart, was Steve Hislop. Sadly taken from his family and all bike racing fans in a freak helicopter 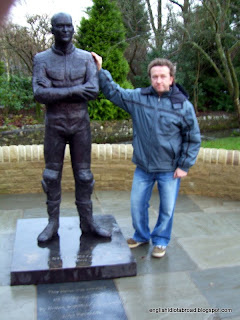 crash, which has still not been adequately investigated in many people's eyes. Steve was one of the fastest superbike riders in the world. When he was on the pace and riding top level machinery he was unbeatable.

He won 11 Isle of Man TT titles, 3 North West 200s and Macau GPs, the Ulster GP, Le Mans and Bol D'Or 24 hour races and was British 250cc champion and British Superbike champion twice. In 1989 Steve became the first rider to top 120 mph with a TT lap at 121.34. This record was beaten 3 years later by WSB champion Carl Fogarty, but he would still only come second to Hislop who was riding a rotary Norton in that race. Foggy's record was to stand for 8 years until finally bettered by David Jefferies in 2000.

Steve was truly a great man who I still miss on the racetrack.

This life-sized bronze statue stands in the park at Hawick, and another identical one has been erected in the Isle of Man.
Posted by John