Zaragoza had become like a home to me after 3 weeks there, but I realised that it was time to move on. My Spanish wasn't improving much, as most of the people I knew were native English speakers. It was beginning to feel like the easy option, I needed a new challenge and to see more of the country I was supposed to be touring around!

I had decided it was far too hot in late June to head south, so looked at the map and considered the Basque Country or Cantabria, both of which looked beautiful. If I started somewhere like San Sebastian, I could then head west and cover most of northern Spain including the stunning Picos de Europa. That was my very loose plan, anyway.

A few days before leaving I was sat on my own at the other end of Gallagher's than normal, to watch MotoGP qualifying. A guy who had just arrived walked in to check the place out. We said hello, he looked around the bar, then we had a quick chat. He was from New Zealand and on a whistle-stop solo trip to a few places in Spain. We arranged to meet up for a beer later and Sean became a good friend in his 3 days in Zaragoza.

Sean is an active tourist and covered all the roman, muslim and christian attractions of Zaragoza, far more than I did in three weeks there! It's due to him that I could feature pictures of places I hadn't photographed myself in previous posts in this blog. 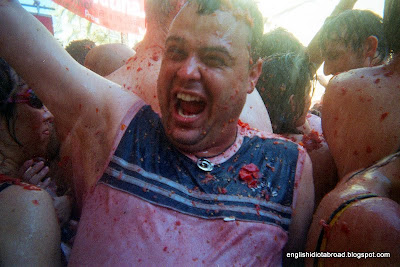 Sean, on a subsequent trip, enjoying Valencia's Tomatino Fiesta!
After Zaragoza, he was heading to what is arguably the most famous fiesta in Spain, to foreigners anyway, the "Running of the Bulls" in Pamplona. "El encierro" at the fiesta San Fermin is where, every morning, a group of bulls are released into the streets at one end of town, and run down to the bullring. Anyone(mainly locals) brave and stupid enough to participate, can run in front of the bulls for as long as they are able to. It's very dangerous and 7 people were hospitalised at this one, 3 of them seriously injured. I like to think of it as the animals getting their own back!

I had previously realised this fiesta was on, and not too far from where I was, but thought it was too late to get a place to stay, and didn't fancy the campsite option with all my luggage. However, because Sean was going, I checked out my Rough Guide to Spain and it recommended staying away from Pamplona and commuting in for the day to enjoy the madness. One of the places it mentioned was Vitoria-Gasteiz. I looked at the map and it was on a direct train line to Pamplona, so decided to head there.

This is how I ended up in the capital of the Basque Country, a place I would come to love very much, and make many good friends. I had never heard of this city, and would probably never have gone there if I hadn't met Sean. I also wouldn't have still been in Zaragoza if my bike hadn't broken down, as I was heading to Barcelona at the time.

I wonder if this what is meant by fate?
Posted by John