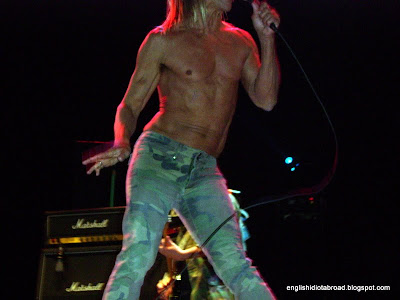 Since 2002 Basque rock fans have had a reason to smile. The Azkena Rock Festival is arguably the biggest heavy metal festival in Spain. Headliners in 2006 were Pearl Jam, but the must-see for me were Iggy and The Stooges. I first got into Iggy Pop in the 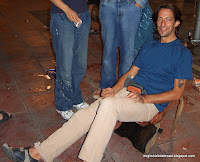 early 80´s after hearing "Lust For Life" at a local club. I bought a couple of his albums which were well worn a couple of years later. "Lust For Life" and the forever played "The Passenger", are true classics and ones that I would never grow tired of listening to. All this said, I had never seen Iggy live and here was my chance 25 years later, and many thanks to my mate Kaldi who gave me the ticket.

When I arrived the Young Fresh Fellows were playing. They sounded pretty good and eased me into the festival spirit.

The Waterboys, formed by singer Mike Scott, recorded their first album in 1983. Their third album managed to reach the top 40 in 1985, and a single from this album, "The Whole of The Moon", reached number 3 when re-released in 1991. Before the gig this was the only song I could remember, thinking "they must have had other hits". Listening to the band, though, I was surprised how many songs I actually recognised. 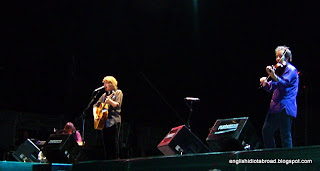 At this stage of the evening it wasn't too crowded, so I could get right to the front to take some pictures. There I met a couple of Irish guys. One of them, Mark, was shouting "Steve-O, Steve-O" at the top of his voice, for the Irish fiddle player, Steve Wickham. I joined in initially, even though I´d never heard of the guy, but stopped after realising that Steve was a bit uncomfortable about it. His fiddle playing was awesome, and the whole set was excellent.

Another band, Green on Red, were next on another stage but we decided to stay in our good spot at the front for the main act of the evening, Iggy & The Stooges. 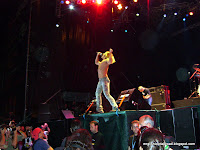 breaking up due to Iggy's growing heroin addiction. They were reformed in 1973 to record the punk landmark album "Raw Power", produced by Iggy's friend, David Bowie. The band would soon split up again, though. In 1977 Bowie and Iggy moved to East Berlin to wean themselves off hard drugs(?), and Bowie produced and co-wrote some tracks on two Iggy Pop albums, "The Idiot" and "Lust For Life", regarded as Iggy's finest solo works, and the ones I would come to buy later.

The big break in Iggy's life would come years later, as a result of these albums. In 1983 Bowie recorded a cover of "China Girl" from "The Idiot" on his massive "Let's Dance" album. The single was a major world-wide hit and Iggy, as co-writer received 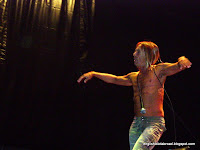 substantial royalties. On Bowie's "Tonight" album in 1984, there were also two covers from "Lust For Life", "Tonight" and "Neighborhood Threat". This would give Iggy the means to take a long break and conquer his heroin addiction, getting married in the process. The two other surviving members of The Stooges, Ron and Scott Asheton, joined Iggy on his 2003 album "Skull Ring", and would later reform the group, becoming "Iggy and The Stooges".

Positioning yourself at the front is great for the view and the atmosphere you experience, and for taking pictures. When Iggy came on stage I was thrilled to be so close, but this also has it's drawbacks. You certainly get close contact with people around you!, and when the crowd get warmed up it can be a challenge to stay on your feet. Many people were hurling various liquids towards the stage as well, much of which was beer judging by the state of my hair afterwards! 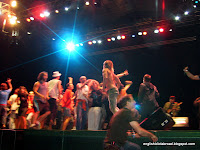 The crowd had really got going, Iggy being very popular here, as everywhere, and when he invited the fans onstage for the song "No Fun", both my head and shoulders were used as stepping stones for the large number of fans trying to accept the invitation. Many were caught by the security in front of the stage and escorted away, but the intrepid ones made it, and were paid off by joining him for the song. 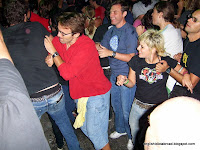 This is the typical melee you will find at a gig like this. Not for the faint-hearted and not many people will come out unscathed. Having said this, it's a friendly, if quite physical experience. The bruises I had later were worth it!

I remember being at concerts by both The Cramps and Killing Joke in Leeds in the mid-eighties, where I really couldn't keep on my feet and was continuously knocked over. Each time, though, somebody would catch me before I hit the floor and help me back up! 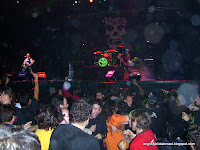 The final band of the evening were The Misfits. Formed in New Jersey in 1977, they were the first ever "Punk Horror" band. Although not really successful at the time, and having split up in 1983, the band's underground fame grew and their records had been reissued and selliing well in the late 80's. In 1995 the original bassist and now singer, Dave Only(or "Weird Hairstyle" as I call him) and guitarist Doyle Wolfgang von Frankenstein reincarnated the group. Tonight's line up was Only, Dez Cadena on guitar and Robo on drums(both former Black Flag). 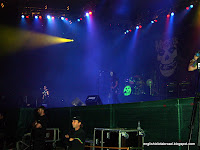 The group has been cited as spawning many later "horror punk" bands, but also influencing mainstream groups, such as Marilyn Manson, Metallica, Green Day, Red Hot Chilli Peppers and Guns N' Roses. They certainly put on a spectacular show for their age, and still have it in them to perform, if lacking the talent of earlier days. 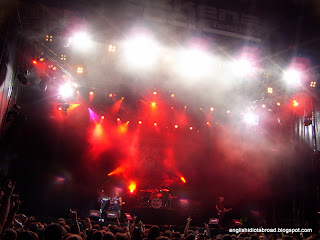 The big finale marking the end of Azkena for me.
If you want to read more about this festival, especially the other days including Pearl Jam's apparently "top drawer" performance, have a look at this blog post by someone more "in the know" regarding heavy metal music, Lou from Pittsburgh.
Posted by John