On one of the plazas near the centre of Zaragoza where I would sometimes sit and have brunch, Plaza San Felipe, stands Argillo palace, a Renaissance building built in the seventeenth century. It was acquired by Zaragoza town council and restored and turned into the Pablo Gargallo Museum in 1985. I noticed from the guide books that it was free entry, so took a look one afternoon. The staff were very helpful and, with pamphlet (in english) in hand and not really expecting too much, I escaped the searing June afternoon heat and ventured inside. (Zaragoza is in the middle of a desert and regularly reached 45ºC by late afternoon).

I was greeted by some of Pablo's horse sculptures which immediately caught my eye and whetted my appetite for more. 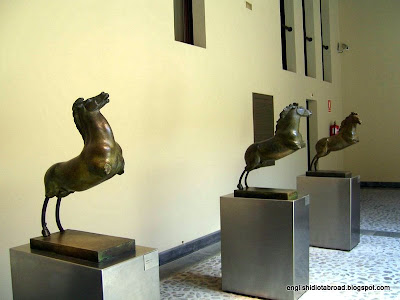 The sculptures were excellent and Gargallo, a good mate of Picasso, is considered to be one of the most significant artists of the Catalan avant-garde and the master of cubist sculpture working with iron.

Pablo Emilio Gargallo Catalan was born on January 5th, 1881, in the town of Maella in the province of Zaragoza (Aragon). His father owned a blacksmith's which was a good start to working with metal. His family moved to Barcelona and in 1895 he entered the studio of Eusebi Arnau i Mascort (great name, eh?) as an apprentice. From 1900 he frequented the "Els Quatre Gats" cafe for literary gatherings with the likes of Picasso, Nonell and Canais. He later moved to Paris, taught in Barcelona until getting sacked for political reasons before setting up permanent residence in Paris. Here he made large pieces out of thick metal. He created sculptures for the Montjuich Olympic Stadium and the 1929 World's Fair in Barcelona and other events in New York. 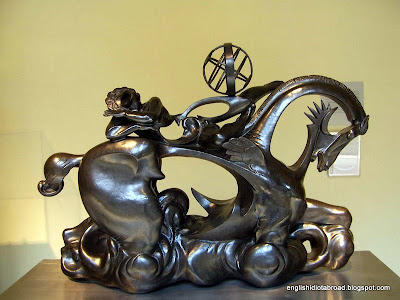 Urano is my favourite of those on display. I have seen a few photographs of it, but they all look dull, including the one in the museum pamphlet. They look more iron than bronze.

In addition to traditional sculpting methods, Pablo developed a style of sculpture based on the creation of 3 dimensional objects from pieces of flat metal plate using paper or cardboard cutouts for his designs, many of which can be seen at the museum. He contributed to the renewal in european sculpture by working with new materials like lead, copper and iron and created a new sculptural language by presenting empty space or void as a kind of volume.
In 1934 Gargallo put on very successful exhibitions in New York and Barcelona but then unfortunately suffered from a sudden fulminating bronchial pneumonia, causing an early death at the age of 53. 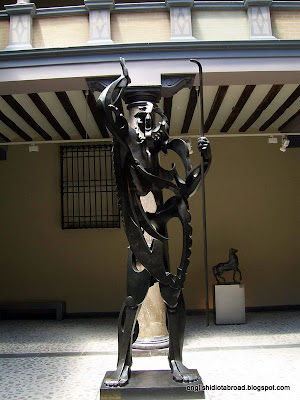 Next post coming soon, "Zaragoza When the Sun Goes Down".