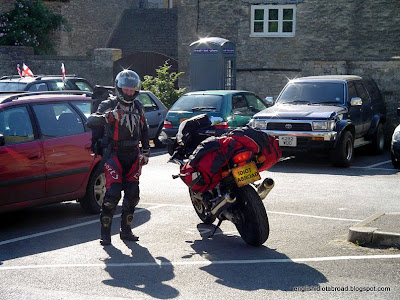 Nick Sanders, eat your heart out! Traveling light is not my bag!

Nick Sanders being a famous biker who has toured probably everywhere, certainly around the world a few times - and without all the backup vehicles and people that Ewan McGregor and Charley Borman had in "The Long Way Round" either. He states on his web site that you should take as little stuff as possible - ahem, sorry Nick.

As my tour is for several months (turned out to be 4 years) and I am also carrying hiking gear and a tent, sleeping bag, air bed and pillow, I don't think I've done that bad. Three pairs of jeans and more than a week's worth of clothes isn't too over the top is it? 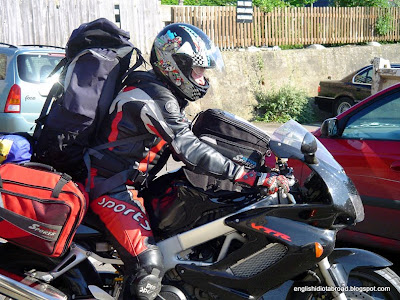 The ferry to Spain was, as all ferries I seem to have been on in the past, a very drunken affair, and the first two-night voyage I've been on. Once the ferry sets sail and leaves Britain's shores, then that marks the start of most people's holiday, so "let's get the party started". I met a very funny guy called Pete on the first night at the bar who ended up buying shorts for me and a Scottish bloke I had just met. Pete and his mates were driving down to Portugal in a van, for the craic! (they actually made it.... well 30kms into Portugal then had to turn around to make the ferry which they did with 15 mins to spare - good lads!) On the next day I just had time to grab a cornish pasty and a Stella from the bar before watching England's first game in the world cup. I got talking to David, who has done more travelling than I've had hot dinners. He and his wife, Stella, have a 'business' card with a globe and tropical island type logo describing them as "new age pensioners. Experts in caravanning, golf & generally loafing around". We proceeded to have a conversation about world travel which turned out to be far more interesting than England's debut against Paraguay. Then met Pete and his mates again out on the deck and got hammered!

Sunday morning was an early start, hungover and hot after carrying all my luggage down to the bike and venturing into Spain. Motorcycle leathers aren't ideal for comfort when it's hot! Managed to find an open petrol station near Bilbao eventually and cooled off with a snack and cold drink.

I don't have any fixed destination in Spain at all, except that I want to keep to the north during the hottest months of summer. However, some friends of mine, now living in the Bay Area near San Francisco, know a guy who is currently living in Barcelona and working for a MotoGP team (Pramac d'Antin Ducati), so I decided to head there as the Catalunian MotoGP races were on there the following weekend. I had a look at my map and decided that Logroño would be a good place to stop for the first night as I felt too rough and hot to do any major mileage.

Remember the "Johnny" method for finding the best, most reasonably priced accommodation by asking in a bar - well it failed miserably in Logroño. I was directed to a four star hotel that was €80 a night! I told the person there that this was too much and asked for a cheaper hotel. He directed me to a three star hotel nearby and I was that hot and knackered that I decided to stay there. The room was large and air conditioned though which was a welcome relief. This was my first night in Spain, so I hadn't got the knack or sufficient Spanish to do any better. I should have used my "Rough Guide" book for hotels in Logrono.

Once out and about in the city I soon came to realise that nobody speaks English and that my night school Spanish was not good enough at all to get myself understood! I also got lost whilst wandering around looking for something to eat and ended up aimlessly wandering the streets for some time. Therefore my impression of Logroño was not very good, I'm afraid. I'm sure it's a lovely place and I may return there for a proper look around during my travels. As it was, I couldn't wait to leave the next morning. I looked at the map and decided to stop at Zaragoza as that was roughly half way to Barcelona and I wasn't in a rush. This time I looked at the Rough Guide and picked a pension that was cheap near the centre of the city, so had a definite destination!

I was on the way to Zaragoza on a reasonable 'A' road and feeling quite good on the bike and not too hot, taking it easy on less than half revs at about 70mph when there was suddenly an almighty loud clattering noise which I could hear easily above the wind noise and sound of the bike's exhaust. I had done 31 miles from Logroño and I'd thrown a valve, or something major anyway! I pulled off the road as soon as I could and found some shade outside a Mitsubishi dealers. I couldn't get the guy to understand that I wanted to use his phone to call my breakdown insurers (glad I took European cover out before leaving!), and felt a bit cheeky so managed to get a card off him with the address on it so I could tell them where I was.

The bike had had a major service the week 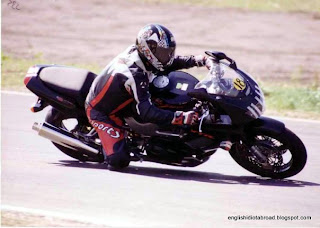 before leaving and the mechanic had said he had 'tapped' the cam chain tensioners in to tighten the chains but they would possibly need replacing at the next service, so I wondered if that had caused the problem as my bike had only done 18,000 miles and it is a Honda after all! I'd never had any problem with it before even when pushing it to the limit on track days in hot weather (apart from warped front brake discs which Honda replaced for free even though the bike was out of warranty), but as soon as I really needed to rely on it this happens! Bolas!

This was the third disaster in three weeks with my bike:-

The day before I left my last address to see friends around England before the ferry, a van reversed into my bike and knocked it onto a fence. This caused only cosmetic damage, but to get it repaired in insurance terms would cost nearly 1,000 pounds. The guy took my phone number but never rang me - you know who you are, Jed!

The following evening I finally emptied the house and left to head down to my mate's in Kettering. I had only gone a few miles and was on the M62 when the back end of the bike started weaving around. At first I thought it was all my luggage and the wind and the fact I wasn't used motorways as I hadn't ridden the bike properly for months, but it got much worse and by the time I'd pulled onto the hard shoulder the rear tyre was completely flat! I was already stressed out and just thought "can things get much worse than this". I had thought it would be wise to take European wide breakdown cover insurance for the foreign trip with my bike insurer, but this didn't come into effect until the renewal date of my bike insurance - two days later!

I was stood there on the hard shoulder on a dark Sunday night holding my bike up as it wouldn't lean over sufficiently onto the side stand with the flat tyre and all the luggage. I racked my mind on who I might call and phoned my brother, Steve, for advice. I was then trying to phone whoever may be storing my insurance phone number details to see if they could at least organise a truck to pick me up, when another biker passed and stopped further up the hard shoulder. I thought "what help can he be with a punctured tyre". I had rearranged the luggage by now to be hanging over one side and the bike would just about stand up on it's own, so I ran up to the bike as the guy was getting off. I explained what had happened and he proceeded to open one of the fixed panniers on his BMW and produced a puncture repair kit! I can't quite explain my feelings at this moment, but you could probably envisage them. I didn't know such things existed, but there was a little tool to roughen up the hole after removing the object (screw in this case) then a rubber bung and some glue to fix it in with. Then 2 small canisters to get just enough pressure into the tyre to drive (very slowly) to a garage to blow it back up to the correct pressure.

My "Good Samaritan" then followed me all the way to a garage with his hazard flashers on (I've forgotten this saint-like biker's name sadly - he gave me his email which I can't find now in Spain - I think he was from Lincoln). I now think BMW's are cool - what other manufacturer would put hazard flashers on a motorcycle? I then continued down to Kettering at an extremely frustrating 45mph and was only about three hours late in the end.

Back in Spain I was waiting in the shade in Calahorra for the breakdown truck which arrived within an hour of me calling my insurers in England. Well done to CIS, with whom I have had my bike insurance for many years (I had a bike stolen several years ago and got very good service then also). Of course, the mechanic couldn't speak English but he also thought the clattering noise was a "válvula" hitting a "pistón". We loaded the bike onto the truck and I asked the Spanish telephone operator by phone if we could go to Zaragoza as that was my destination. We couldn't do this so we proceeded to head back to Logroño! However, once there the breakdown guy phoned the Honda dealers and they were shut as there was a fiesta about to start! So we had no choice but to head for Zaragoza after all.

We got to Zaragoza about 7.30 and unloaded the bike at the Honda dealer. I was told that they would strip the engine and should know what the problem is by eleven o'clock the next morning. Fingers crossed, eh!
Posted by John