Instead of using the "Johnny" method of finding accommodation, I used the independent travellers' guide book to find a hotel in Zaragoza, which listed a cheap, centrally-located guesthouse, Pension La Peña. The guide had the number, so I sorted out the room from the bike shop after being taken there by the breakdown recovery truck (or rather Paco, who runs the shop, did).

The taxi from the Honda dealer seemed to take ages, as there are many road works in Zaragoza (English name Saragossa). Then the driver couldn't actually drive right to my guesthouse, so I had to carry all my luggage and leathers quite a way and up some stairs to reach it. I was also on the third floor, so was knackered when I got to my room. The room was very clean and a bargain at €20 a night. The bathroom and toilet were shared, but that first shower was priceless. I went out to find a bar nearby, and though it was called "Harry McNamara's Bar", yet again no English was spoken there.

Feeling a bit down about the bike troubles and not being able to speak to anyone, I began to think that Zaragoza would be another Logroño-type experience, only in a bigger city, and I'd be just as glad to leave there, when I rounded a corner heading towards the central plaza, or square, and was greeted with the street view below. 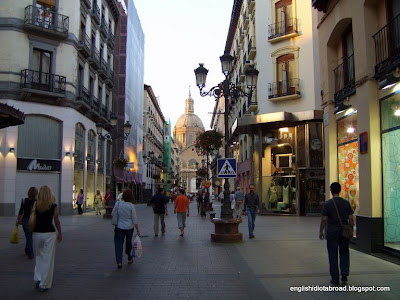 This is Calle Alfonso I which leads to the city's central plaza and straight ahead is one of the towers of the Basilica de Nuestra Señora Del Pilar. My spirits lifted immediately and I thought "this is more like I expected".

The Basilica is on the north side of the Plaza del Pilar, an amazing square which was paved in brilliant pale stone when remodelled in 1991. It is about 500m long and gives a sensation of great spaciousness. 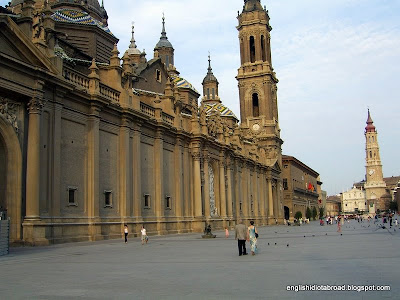 View to the east in the Plaza del Pilar.

Every major epoch in the city's development is covered around the square. The city was founded in 24 B.C. by the Romans on the site of an ancient Iberian fortified town on the banks of the River Ebro. It was named Caesaraugusta in honour of its founder Emperor Caesar Augustus. It was surrounded by a rectangular wall with four gates. These walls were up to seven metres thick in many places, the outer part consisting of alabaster and limestone, the inside mortar being amazingly hard (opus caementicum). 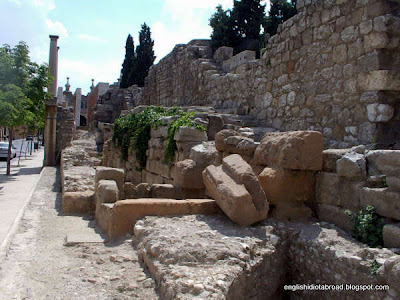 Roman wall ruins at the western end of the Plaza del Pilar (thanks to my roving Kiwi photographer Sean for the picture). 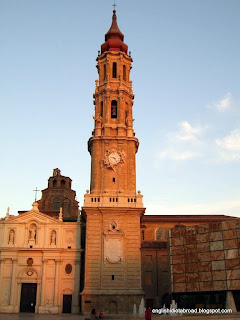 At the east end is the old cathedral, La Seo, which was extensively restored a few years ago.

In A.D. 714 the city was conquered by the Muslims, a fate which would befall nearly the whole of Spain, and became known as Saraqusta.

In A.D.1118 it was captured by the troops of Alfonso I, the Battler, and become the capital of the Kingdom of Aragon. The cathedral was built shortly after, hence the Gothic-Mudéjar style, a combination of architectural design and materials used under centuries of Muslim rule, and later superimposed Christian Gothic.

By far the most amazing building in the plaza is the Basilica of Nuestra Señora del Pilar. This Baroque masterpiece is one of Spain's greatest and most revered religious buildings and one of the most important sanctuaries devoted to the Virgin Mary in the Catholic world.It flanks the River Ebro's southern bank in majestic style. 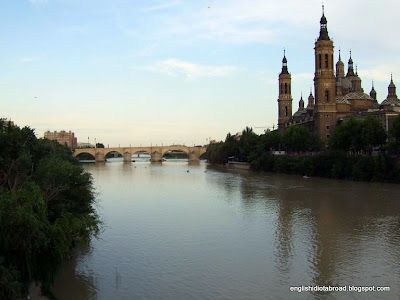 According to an ancient tradition, prior to her death the Virgin Mary came from Jerusalem on the night of 2nd January A.D. 40 to visit the Apostle Saint James, who was preaching the gospel to early converts on the banks of the River Ebro. The official i/DN tourist guide to Zaragoza says she came and brought the Pilar ('pillar' or 'column') with her, on top of which was to be built the first chapel. Other guides say that she descended from heaven as an apparition on top of the Pilar.

Whichever version you subscribe to, if either, today the original Pilar, topped by an image of the Virgin, is constantly surrounded by pilgrims who line up to touch an exposed section. Over the centuries several temples have been built here since the original one, but the current Basilica was designed and built in the 17th century when the cult of the Virgin del Pilar reached dramatic popularity.

Apologies for all the tourist stuff, but this city has so much history right in the centre that I had to give a potted version of it to do it justice.

A small charge gets you by lift to the top of one of the towers of the Basilica, from where there are some great views of the building itself and over the whole city. I didn't go up myself, but thanks to Sean for the photos below. 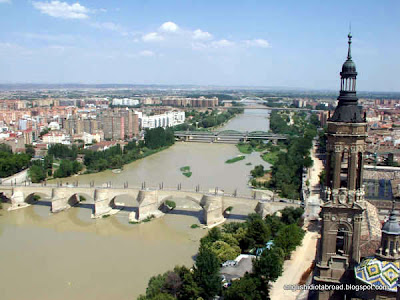 View to the east with the River Ebro. View to the south from the Basilica tower.

Apart from the Plaza, the other main attraction of note is the Aljaferia, which was built in the middle of the eleventh century in the heyday of the rule of an independent Moorish dynasty, the Ben Kasim, thus predating the Alhambra in Granada. 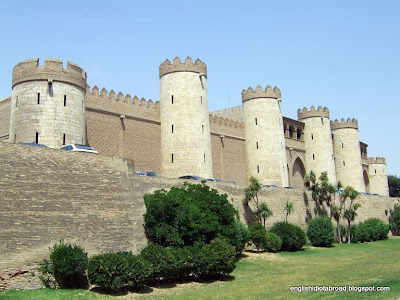 The next day was "the day of reckoning", when I would find out just how much damage had been done to my motorcycle. I went to the Honda dealer expecting mucho expense and time to work on the engine. On arriving there, I was taken into the workshop by the mechanic, who could speak a little English, and was shown the front cylinder's cam chain tensioner, whose spring had disappeared (disintegrated, I hope, and not somewhere in the engine). So the noise I had heard was the cam chain rattling, but there was no evidence of damage to the rest of the engine. The repairs would simply be two new cam chain tensioners, as the rear one could be suspect too. Excellent news compared to how bad it could have been. They said I could pick the bike up the following evening if the parts arrived on time. Marvellous!