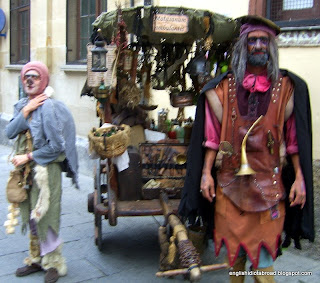 Every year since 2002, on the third weekend in September, Vitoria-Gasteiz becomes home to a three-day long medieval fiesta. Many market stalls spring up lining the streets on the crest of the hill in the old town. In the rest of the city there are street artists, jugglers and jesters, dancers and ancient battle games, including jousting and sword fights. 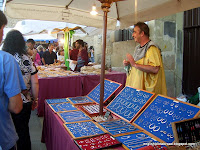 The market features dozens of stalls and is the biggest of it's kind in the Basque Country, with people coming from all over Spain to sell their wares. There are many food stalls and even pigs being roasted on spits, and a plentiful supply of "sidra" (cider).


My friend Hardi was on hand selling his fine jewelery, but you have to keep an eager eye on some of the customers........ 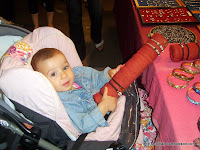 ......like the lovely little Iris, my mate Jarrod's daughter, a budding kleptomaniac caught in the act in this picture. By the age of 1, she had already got her Mum, Maitane, in trouble from store detectives with her light fingers!

The medieval atmosphere is enhanced by strolling minstrels and music coming through megaphone speakers, which is very similar to medieval music you might hear at similar fetes in England, but with a distinct arabic feel to it.

When I thought about this it was hardly surprising as, during medieval times, Spain was ruled by the Moors. "Moors" is a term for the Muslims from North Africa, of Arab or Berber descent, who conquered the Iberian Peninsula within 8 years of their invasion in 711 AD. They ruled most of Spain for several centuries, with the exception of northwest areas, such as Asturias, and the largely Basque regions in the Pyrenees. Their attempts to extend their territory across the Pyrenees failed when they were defeated by the French.
My name in Arabic, from a market stall here.

All this Muslim history may well go unnoticed in visits to many Spanish cities, particularly in the north, with the many beautiful and ancient catholic churches to be found, but 8 centuries ago, in 1200 AD, 80% of Iberia's 7 million inhabitants were Muslim, hence buildings like the Alhambra in Granada and the Aljafera in Zaragoza, pictured below and in my post Zaragoza, History and Bike News. I was in Valencia for several months and you would be hard-pressed to find a lot of Muslim influence there, but this was probably destroyed by the legendary El Cid when he laid siege to the city and carved out a small kingdom for himself at the end of the 11th century.

Christian resistance grew from Visigoth enclaves in the northwest and different kingdoms slowly extended their power. In the early 13th century, combined forces under the leadership of Alfonso VIII of Castile drove the Muslims from central Iberia. A later marriage between Ferdinand II of Aragon and Isabella I of Castile(Reyes Catolicos) united all the christian kingdoms and in 1492 the last Muslim stronghold of Granada surrendered. This was the time of the Spanish Inquisition, aimed mostly at Jews and Muslims who had officially become christian but were thought to be secretly practising their faiths. They were expelled, forced to convert to christianity or murdered. Cartman, from South Park, would have fitted in right well there! :-) 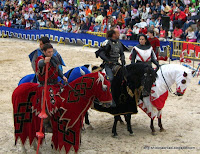 Anyway, back in Vitoria, a flavour of these many battles is provided on the Saturday and Sunday evenings of the fiesta with medieval games in Plaza del Los Fueros. Here the protagonists line up before commencing battle.

The jousting warmed up using targets, but then one-to-one combat which was pretty realistic with the knights being knocked off their horses. I certainly wouldn't care to be on the receiving end of one of those lances!

This caused some unscheduled "equine frenzy" entertainment when a horse bolted following one of the jousts.


There was a woman fighting in the games, and she could certainly wield a sword! The crowd became partisan and had their favourites, on our side it was the "chica" and the other a scary black knight. She did very well, despite appearing to come a cropper in this video, she got back up and defeated this lesser knight.

The black knight was ruthlessly slaying his challengers and winning more support from the crowd. The finale saw him fight against the chica, and despite myself and our side of the crowd cheering in support for her, the knight proved to difficult and would come to win the day. 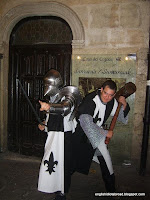 The locals like to get involved also, here's the Harley-riding barman from Rock Bar Rivendell on Calle Cuchilleria with his henchman! You'd better behave when head-banging in his bar!


Also here's the lovely Susana, the best barmaid in Vitoria, from bar Txistu where they serve the best Irish coffees in Spain. 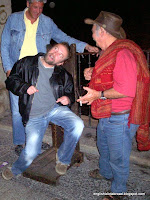 They had gruesome methods of torture in those days, here's Karlos giving me the head squeeze for being an English infadel! Australian friend Tony can only watch and laugh - so much for Commonwealth solidarity then! He he!


I did get my revenge later though!
Posted by John