Zaragoza When the Sun Goes Down 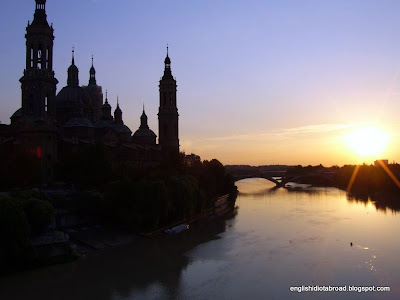 I don't think I need an excuse for another picture of the Basilica de Nuestro Señora del Pilar, so here's one of the sun setting over the Rio Ebro.

This river winds all the way across Spain to the mediterranean from it's source in the Basque country, a large lake called the Embalse del Ebro in the aptly named Pico de los Tres Mares (peak of three seas), only about 70 kilometres south of Santander on the Atlantic coast. It is the longest river in Spain and it is believed that the ancient Greek name for this river was "Iberus", which was first documented in the 6th century BC by a Greek author in reference to the Iberians, or the people who lived along the Iberus river.

Ultimately the word may well derive from the Basque words ibai (river) and ibar (valley), and also from ur meaning water. Linguists have noted similarities with the names of 200 other European rivers and streams (such as Ibar in Serbia, Ebrach and several Eberbach in Germany, Irwell in The UK), suggesting that a form of Basque was once spoken throughout Europe before the arrival of Indo-European tribes and languages. I will cover this, and recent genetic studies from Oxford university pointing to Basque origins of British people, in my forthcoming posts about the marvelous Basque country (where I ended up staying for four months on my "travels"!). 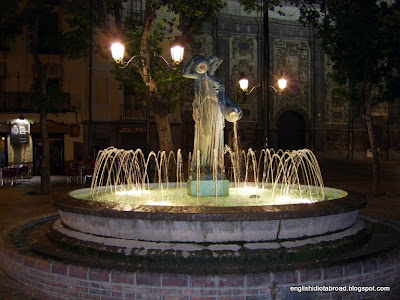 Plaza del Justicia, a great place to sit and relax in the cool of night

I grew up in a pub and they are the places in which I feel most at home. Well that’s my excuse anyway! Therefore bars are an important part of my trip. They are the best places to meet people as well, so another good reason to frequent them as much as possible, eh? The trouble is that, if you spend a very long time in them, you end up getting very drunk. It was the day after one of these occasions, where I had even (unusually) ended up in a night club, that I found the following picture on my camera. 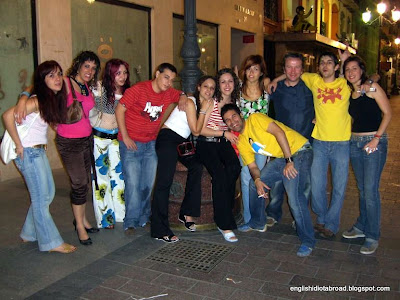 I had no memory that this, and another picture of the guy at the front, had been taken. I had run into these youngsters several times on the way home from a night out and they would practice their english on me (poor sods). On this night I had my camera attached to my belt as I'd been out since the afternoon, so that would explain it then! 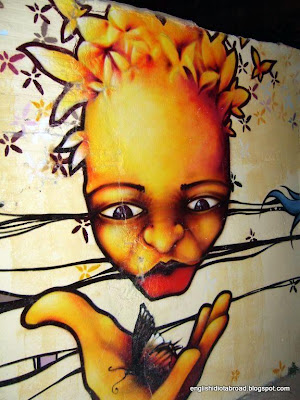 Zaragoza is going through a massive building and restoration programme ahead of hosting the World Expo in 2008 which, appropriately enough for this desert region, is entitled “Water and Sustainable Development”. Most of Spain is short of water and in Zaragoza there have been ideas put forward to drain the old canal, whereas in Valencia (where I am now) they are working on a desalination project.

As a result of this the traffic is even worse than other Spanish cities, and hundreds of local police can be seen waving their arms and blowing their whistles in an almost impossible attempt to keep vehicles moving at rush hour. There are also many temporary walls around building sites, and the like, where the local graffitists soon get to work. I have included just a couple of examples on a wall around the corner from my pension. It certainly beats the stuff at home! 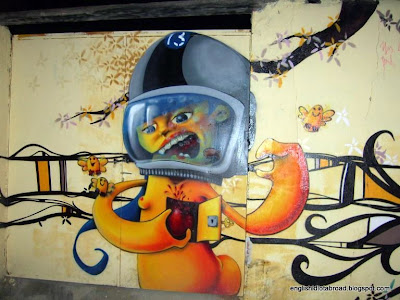 Posh graffiti in this city!
Posted by John