There are two large music festivals in Vitoria each year, the Festival de Jazz in July, and the Azkena Rock Festival in August. I was lucky enough to be there for both. For the Jazz Festival, there were some concerts at large venues with entry fees, but plenty of smaller bands performing free in bars and on the streets. 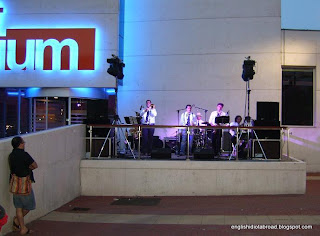 I was sat in my room on the first night and could hear some kicking Jazz nearby, so went to investigate.

Just around the corner from my pension is the city's major modern art gallery, The Artium(which I will cover in a future blog entry).

This local band, Gasteiztarra, was playing outside, and turning out some great Dixieland tunes to a small crowd of passers-by.

Crank up the volume on your computer, and click on the YouTube play button right to see and hear a short video sample, and get "Jazzed-up"!

I was in a bar the next day and the barmaid told me that there was a group playing that night at midnight. I asked "¿Qué grupo?" it was, and she said "Yazz". Well, I was amazed to hear this, as I was certain that the pop diva(whose first single "The Only Way Is Up" was the best selling single in the UK in 1988), was not performing anymore.

I later realised my error, she was simply saying the word "Jazz", in Spanish!

Free outdoor music festivals are always the best, in my opinion. They attract a different kind of audience and are more family orientated. A more peaceful atmosphere than the over-priced, high security modern festivals. 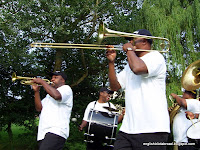 On the Sunday of the festival there was an evening of free jazz in the park at Campas de Armentia to the south of the city.

New Birth Brass Band (their name stemming from the tragic floods in New Orleans) walked through the crowd during the gaps between the stage shows, causing much amusement and entertainment.

First up at the concert was the six piece band, The Dukes of Dixieland. They represented the traditional white Jazz of New Orleans, and played compositions stretching back nearly a century, but which have certainly stood the test of time.

The second group, and the highlight of the concert, was fronted by Doctor Michael White. An institution in New Orleans, Dr. White is a musician, composer, historian and professor of afro-american music. He played the clarinet, with veterans Gregory Stafford on trumpet and Detroit Brooks on banjo. 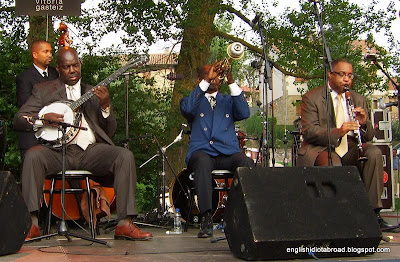 He had even composed a song especially for the Basque audience which was enthusiastically received. However, my favourite piece was an excellent rendition of Gershwin's "Summertime", a composition recorded more times than any other in history. Click on the video link below to see the end of this song, after which I pan to the crowd to give you a flavour of the scene. 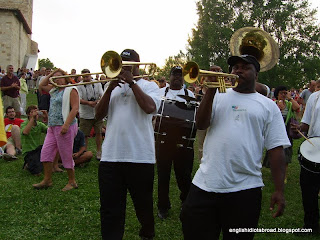 The New Birth Brass Band were out bringing the music right among the audience once again, with "When the Saints...".

Marching bands have been around in New Orleans since the 19th century, and remember that funeral scene in the James Bond movie, "Live and Let Die"?


The final band on stage was the six-piece "Spirit of New Orleans", formed following Hurricane Katrina by musicians famous in their own right, and with their respective bands. They proved so much in demand that they have taken their performances around the world. The trombonist, Lucien Barbarin, is considered the best in New Orleans and comes from a family of famous musicians, his great-uncle, Isodore, being the mentor of Louis Armstrong. 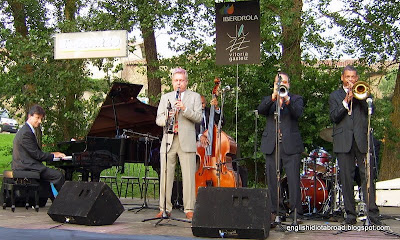 My camera has a case with a belt attachement which I normally wear on my hip. As I was sat on the grass watching the concert, this was uncomfortable, so I moved it round to the centre of the belt, which would later have dramatic consequences.....

...at this point I was busting for the toilet, but the portaloo area had been closed off, so I eventually found a building which looked like a pavilion. Inside were some toilets, so, as I had button-up fly jeans, I was desperately undoing my belt, at which point the camera fell in the toilet bowl!

I immediately fished it out, thinking "Oh my god! The camera's knackered, and I've lost the pictures and video I've just taken". I walked out of the building, cursing and swearing at my stupidity, and there was a group of smartly-dressed men outside. I started talking to the first guy and was pleased to learn he was American, and very intelligent, so could converse with someone in english, for the first time since being in the Basque country. Still stunned from the toilet incident, I told him about my camera, and that I was traveling in Spain and writing a blog about my experiences. I then introduced myself and shook hands, asking "what's your name?". To this, he slightly indignantly replied, "I'm Michael White"! I suddenly felt very small, and tried to dig myself out of the big hole I was in, by complementing his performance, especially the rendition of "Summertime". Well, I had enjoyed a bottle of vino tinto and some herbal tobacco while watching the concert! It turned out that the building I had found to relieve myself was the artists' changing area, etc. 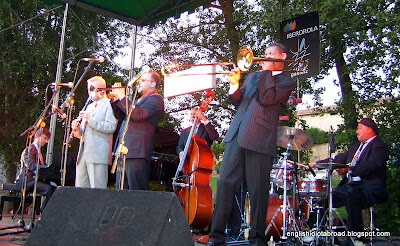 The last band played some very lively jazz, and by this stage the audience were really getting into the atmosphere, and a number of people had started to dance near the stage. I went over to join them, and had a right good boogie. It was the climax of a brilliant day, and all for the cost of a bottle of vino tinto. Cheers Vitoria-Gasteiz!
Posted by John