Spain is a large country, and the climate can vary widely from north to south, and from sea level to higher altitudes, of which there are many in this mountainous peninsula. I left Soria with freezing temperatures to ride 230 miles(370 Km) to Valencia, a city in which I had only previously spent one night, but had been to the nearby town of Cheste to watch World Superbike and MotoGP racing half a dozen times. The ride over the Meseta via Teruel was very cold, but as soon as I descended towards sea level and the eastern mediterranean coast the winter overjacket came off, and by the time I got to Valencia I was too hot! 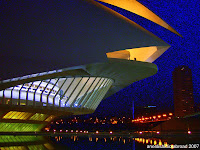 Searching for a hotel in a new city in the heat of the early evening, after a long ride with myself and the bike fully loaded up, is never easy, particularly with the inevitable network of one-way streets and confusing road signs, macho Spanish car drivers, scooter riders who view themsleves above the normal laws and rules of driving a motor vehicle, and cyclists who aren't even aware that rules exist.

I had found a cheap centrally located pension in my guidebook which had a small map of the city centre, the night before, 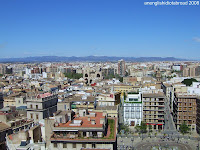 but in a city the size of Valencia, how do you know when you are in the centre of the city? You can follow the odd sign "centro ciudad". Having a good sense of direction works against you in these circumstances, because you know you are going the long way round, but to get from the outskirts to the centre usually involves driving in ever decreasing circles. In the centre of Valencia there are no landmarks or visible mountains, as most buildings are around 5 storeys high, so it is very easy to get lost. By some freak chance of luck I managed to stumble upon the pension quite quickly!

Valencia is the capital of the autonomous region of Valencia, which has it's own language, Valenciano. The city was founded in 137 BC by the Romans on the site of an old Iberian settlement on the banks of the river Turia.

It is now the 3rd biggest city in Spain, with a population of about 800,000. In 1957 the river flooded big-style, and the decision was made to drain and redirect it to the west of the city, with the old river bed being turned into parks and sports areas. 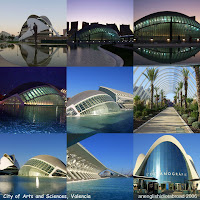 In 1996, at the port end of the river bed, work began on the Ciudad de las Artes y de las Ciencias. The best collection of modern buildings I have ever seen, designed by Valencian architect Santiago Calatrava, and L'Oceanográfic - the biggest aquarium in Europe with 45,000 examples of 500 different marine species from all "corners" of the globe. I will be covering the City of Arts and Sciences, and other highlights in more detail in the next few posts.

Valencia boasts several beaches and a thriving port which won the bid to become the first European city to host the Americas Cup in 2007 - due to the fact that the holders, Switzerland, are landlocked. The Swiss team, Alinghi, successfully retained the trophy, beating the pre-competition favourite, Emirates Team New Zealand, and the races will be staged here again in 2009. 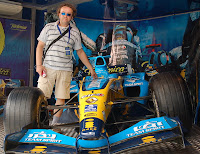 The port area also held it's inaugural Formula one race this year on a new street circuit, although local hero, Fernando Alonso, was shunted out of the race on the first lap. The races proved very successful, with Lewis Hamilton saying "The marshals are the fastest and best I have ever seen during my time racing", praise indeed.

The Holy Grail is housed in the cathedral here. The main football team, Valencia CF, are previous winners of both the Spanish premier league, La Liga, and European trophies. They haven't been on top form since I've been in Spain, but are currently running in 4th place, two points behind Real Madrid. 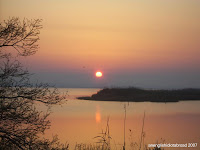 Just to the south of the city lies the Albufera, the largest wetland on the mediterranean coast, covered by the Ramsar convention, a birdwatcher's paradise. From here you can witness possibly the best sunsets in Spain, and the area is also the birth place of the region's most famous dish, Paella. The authentic Valencian Paella, and the most tasty, is with chicken and rabbit on the bone, not seafood. 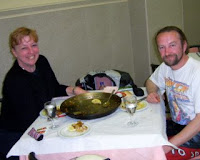 After enjoying the romantic sunset, accompanied by the cacophony of birds settling for the night, you can head for the nearby village of El Palmar and enjoy a pan of the best Paella to be found. 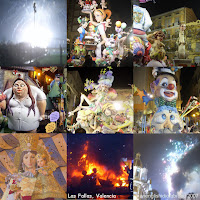 If you've read my previous posts, you will be aware that each city has one big fiesta which overshadows the many others, and Valencia has one of the biggest in Spain, Las Fallas - a wild six day party, and definitely the loudest fiesta there is, with symphonies of choreographed explosions every day in the main square. Hundreds of large scale polystyrene characatures are erected in all the city squares, competing for prizes. On the last night they are all strapped with fireworks and set fire to, probably the largest display of pyromania anywhere in the world! Watch out for my post on this soon!
Posted by John