The first Irish bar I found is on calle Alfonso II, close to the central Plaza Del Pilar. Flaherty's is one of a family-run chain of 4 pubs in Spain, the others being in Barcelona, Sevilla and Sotogrande. They do a hearty Irish breakfast(pretty similar to English, but using Irish sausages and bacon), and jacket spuds seemed to be very popular in here.

They are big on sports here and have two reasonably sized screens. They have Sky TV, which is great for bike racing fans like myself. Provided there is no big event on, they will happily switch channels for you, so I would go here for brunch and watch MotoGP qualifying, and the like, on Eurosport.

The bar manager, Scott, is a good guy who literally lives up to his name(being from Scotland). There is also a good Spanish barman who has previously lived in England, so it was "good to talk". There were nice touches, such as, if you have a few wines, they

will make one of them "on the house". Here, like most bars in Spain, you don't have to keep fumbling for cash every time you get a drink, you just settle up at the end. This is an example of how uneuropean we can be in England, as many countries operate the tab policy. Maybe it just wouldn't work, though, as several people would probably abuse the system by leaving without paying!

I was in Flaherty's one day to watch Portugal playing in the world cup. I was surprised it wasn't showing there, as was another English guy I met there. He suggested going to another Irish bar nearby to watch the match. This was to be my first visit of many to Gallagher's, which I immediately made my local.

Gallagher's is facing the roman wall ruins on calle Murallas Romanas, next to the Plaza Del Pilar. It's open until 3 a.m. on weekdays and 4 a.m. on Saturdays which is ample, even for me! They serve the usual Irish drinks and have a great selection of sandwiches with amusing names, such as Publiner, Morrison, Bono and Bowie. They are really tasty, if a little high in cholesterol. Behind the bar you will find Chris, the lovely Romanian Nonnie, Jason and Graham(or "Elvis" as I called him because he looked a bit like Mr Costello). This bar is a favourite haunt for many English speaking ex-pats, as well as having a healthy Spanish clientele. They have a bilingual quiz night, which is a good laugh.

They have a huge screen and it was the perfect place to watch the footie, particularly the England games.
The first person I met there was an Australian called Lorne. He, like many native english speakers over here, was teaching english as a second language. 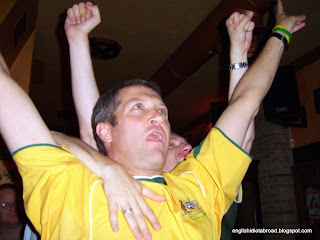 Australia were doing really well in the world cup, and we enjoyed a few games until that fateful game versus Italy...

Lorne's brother was taking part in the Ozzie "Big Brother" TV program, and faring pretty good, being the only person not to have been nominated at that time.

Lorne celebrating Australia's 2-2 draw with Croatia, meaning they were through to the last 16 knockout stage.

This was the furthest Australia had ever got in their few world cup final stage appearances(they were last in the finals 32 years ago!), and the team were looking pretty good. They then went on to play Italy in a knockout match that proved to be the most controversial of the competition.

Italy had a player sent off early in the second half, and, despite having more attempts on goal, hadn't managed to score in normal time. Australia were holding their own and it was looking like the game would got to extra time. This would favour Australia as their players were known for being extremely fit and the Italians were definitely looking more tired. Four minutes of injury time were awarded, and, 8 seconds from the end of this added time, Italian player Fabio Grosso worked his way into the penalty area and deliberately fell over Ozzie defender Lucas Neill's prone body.
The referee awarded a penalty and Australia were out of the cup, which Italy went on to win. Cruel!

As you can imagine, Lorne was really hacked-off. He wanted to go and find some Italians, so we headed to Flaherty's, where I captured this image on my mobile.

The picture speaks for itself, really!


Gallaghers was the place to watch England ganes in Zaragoza. Below is a picture taken during the kick-off of the match against Ecuador, where David Beckhan would become the first English player to score in 3 world cups, despite throwing up on the pitch later due to dehydration and heat exhaustion. 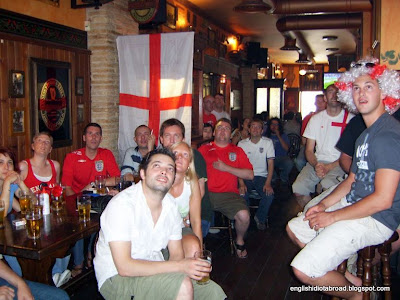 I met a lot of good people in this bar, not least the barstaff, who were all friendly and a good laugh. 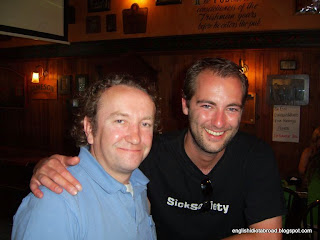 I don't know if anyone reading this takes any notice of tabloid newspapers in the UK, but they try and stir up rivalry with Germany at the slightest opportunity.
Two of the best guys I met in Gallagher's, where, you've guessed it, German.
Personally, I don't have any predetermined or bigoted feelings about any race, I just judge people as I find them...

Me and my good mate Sebastian 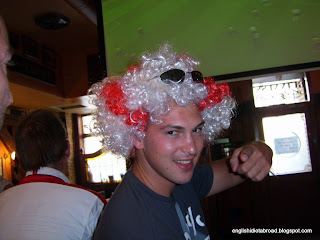 ... and I found Sebastian and Kaj to be two cool dudes.
They where both doing foreign work experience in Spain as part of their apprenticeships/degree courses in the printing industry.

I never got that opportunity at university, the lucky sods!

Kaj becoming an honorary England fan for the Ecuador game. 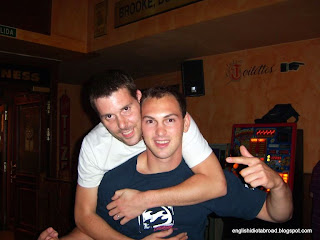 Kaj, or "Günter", as Chris (the biggest joker and mickey-taker behind the bar) used to call him, could tell you everything you ever needed to know about printing (yawn!).

Kaj was to be sadly missed by the local Brits when it came time for him to return to Germany. This is an English mate, Saul, with Kaj on his final night.


Spain also got through to the knockout stages. I, of course, became a Spain fan for their games. For the knockout game against France, they erected a huge screen in the Plaza Del Pilar. This was sadly not to help them, though, as France were to blast them 3-1 in this game, and eventually go through to the final where they would lose to Italy on penalties. 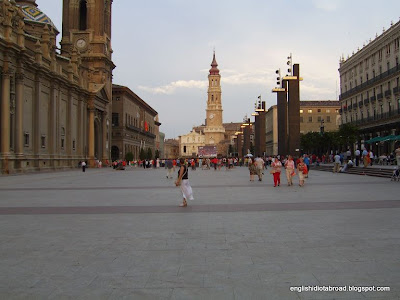 Big Screen in the Plaza del Pilar
With Spain, and later England knocked out, my interest sort of fizzled out. I even forgot the final was on, and was having a meal in a Chinese restaurant at the time. I only realised I'd missed it when walking past a large war monument in the Basque Country, which a guy had scaled to joyously raise the Italian flag, and wildly celebrate!
Posted by John