Around Valencia - off the beaten track 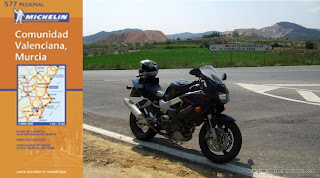 Holidaymakers in Valencia who visit a tourist information office or buy a guide book will, understandably, end up at the major tourist attractions of the region.

Places such as La Albufera, a large wetland to the south of the city with teaming birdlife, beautiful sunsets accompanied by a cacophony of bird songs as they settle for the night, and nearby the village of El Palmar, the birthplace of the delicious Paella. 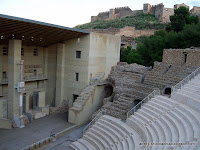 To the north of the city lies the roman town of Sagunto with it's hilltop fortress, and an ancient roman theatre that has been 'tastefully' modernised as can be seen here, but at least it is still in use for performing arts. 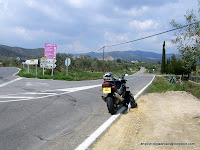 Being an independent tourist with a motorcycle and some time on my hands, I like to find my own places. Armed with a regional road map I would look for interesting places. My criterion would basically be to find roads that involve mountains and/or lakes and look twisty enough to have fun riding them. Michelin maps also have helpful green stripes along the side of roads to indicate 'areas of outstanding beauty'.

A hidden treasure I discovered on one these trips is Andilla.
A town literally at the end of the road. 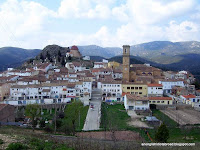 It turned out to be a nightmare to get to as there had been heavy rainfall the day before (with the temperate weather in Valencia it doesn't rain that often, but when it does it really throws it down!) which had washed loads of small stones down the steep slopes onto the road. It was like riding on marbles which, as any biker knows, is terrifying on a sports bike! I had to drive really slowly and use every ounce of concentration for several miles. 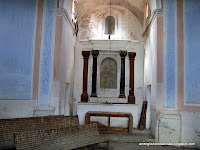 I took a ride around and found an old church at the top of some pretty tight twisty streets. The 15th century 'la ermita de Santa Inés' was closed and in bad repair and currently inhabited by pigeons as can be seen by the state of the pews. I've read that it's now been restored, so it would be interesting to see again now. 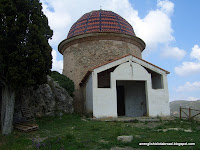 There were absolutely no tourists (or locals), in fact I didn't see a single person anywhere whilst riding around, but it was mid afternoon and therefore siesta time. After looking at the medieval church I found a small cafe bar and was pleased to see it was open, if bereft of customers. I partook of some food - whatever looked tastier of the tapas on display as I didn't know what they actually were. 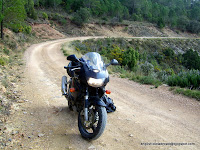 Whilst eating I looked at my map as I really didn't fancy going back over the road of nightmare pebbles. When approching the village I had noticed a dirt road heading up into the hills to the west, but it did look a bit dodgy for a road bike.
I asked the proprietor of the bar if the track would be ok and he said "yeah, no problem", so once fed and watered off I went. 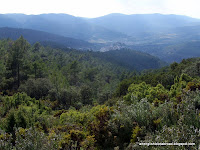 For the next 10 miles the dirt road wound up into the luscious green mountains where I only came across one other vehicle and passed through seemingly deserted farms and olive groves, beautiful! 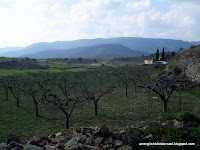 Just taking unmapped roads can be a bit hazardous though, especially if one has a petrol guzzling motorcycle with a small fuel tank like my Honda VTR1000. I found this out to my cost when out exploring some mountain tracks around Valencia one day.

I had taken a dirt road that passed by a large lake and, according to my map, there was minor road at the other end. Whilst travelling along this track the only sign of civilisation I had seen was a white van by the start of the lake. The road wound and wound and, well, wound it's way around the lake for ever! 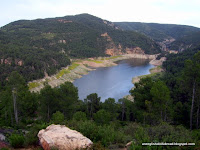 By this time I realised that I was getting very low on fuel. I contemplated sleeping by the side of the track and wondered how cold it would get up there at night in May (about 800m above sea level). I wasn't looking forward to that though as all blood drinkng insects seem to love biting me. When I say that there were no signs of life - there weren't even any birds tweeting - just the sounds of silence and obviously no mobile phone signal. Driving as slowly as possible to conserve petrol I came to a T-junction and stopped and got off the bike to try and figure out which way to go.
The lake was still below to the left and to the right was uphill so I couldn't really see anything. 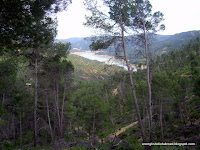 Looking at the map didn't help as I couldn't tell exactly where I was. As my bike doesn't have a fuel gauge I have to estimate how much petrol is left using the milometer and I reckoned that I had about 10 miles (16km) left in the tank, so the decision would be crucial. I rolled a cigarette and walked around trying to see any signs of life or a proper road. I couldn't and was totally flumoxed. What happened next was 'increible'.

I heard a vehicle on the track and the white van I had seen an hour or so earlier came into view behind me! I can't begin to describe how happy I was to see the two 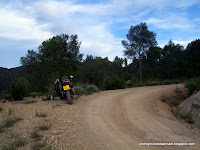 local guys who had just been poaching fish. I explained my predicament and asked if there was a 'gasolineria' nearby. They said I should follow them to their 'pueblo' and set off (taking the right turn). I quickly threw my jacket and helmet on and endeavoured to follow them at a slower pace as I was virtually running on fumes. They almost drove slowly enough for me to keep them in view as well. After a short while the road became asphalt, but I did start to worry where these guys might be taking me as we had already passed through one small village but within another few miles we got to their village, Casas de Medina, phew!

Unfortunately by this time the petrol station there had closed for the evening so the guys stopped opposite a pension and said "you can stay there". I thanked them and they drove off. I was still with the bike contemplating having to pay for a room as I already had a room in Valencia when the white van driver turned up and asked if I ws OK. I explained I already had a room and he then offered to take me to the nearest open gas station in Utiel for a can of petrol. This was brilliant and many thanks to my Valencian good samaritan! 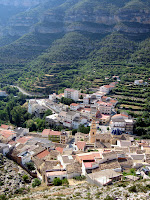 Another out of the way place I found during my motorbike wanderings is the tiny village of Cortes de Pallás. Perched on either side of a small ravine overlooking a large reservoir. A bronze age axe was found here and 150 Roman coins dated around the start of the first millenia, but it was a more important town during the Muslim era which lasted for many centuries.
After the 'Moriscos' had been overthrown in this region in the 13th century by James I of Aragon (Jaime el Conquistador),

they were made to pay a levy of 400 bezants. They built the now ruined castle, which overlooks the village, in the 15th century. They were expelled in the 17th century in what can only be referred to as ethnic cleansing. The population of about 1500 was decimated and only around 40 dwellings were left occupied. Now the town is mostly agricultural producing mainly olives and almonds, the main livestock being goats and sheep. The population is around 1,000. 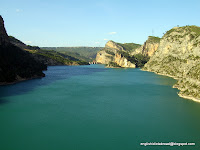 Renewable energy is at the forefront in Spain with hydroelectricity being a major source of energy. There are already two hydroelectric plants here, with a conventional one below the reservoir dam and a pumped-storage station inside the mountain. When I was there the biggest spanish energy company, Iberdrola, were constructing a third plant which would make 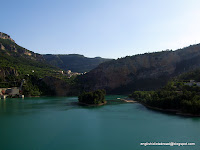 the installation the largest hydroelectric power station in europe, due for completion this year (2012). The estimated annual output will be around 800 GWh for the new plant,
La Muela II. The plant is inside the mountain near the village (to the left in this photgraph) with a huge feeder reservoir some 500 metres above.

will pump water back up to the reservoir during the night when there is low energy demand.
The concrete piping used to transport all this water is a massive 5.5 metres wide. The combined output of these two pumped-storage units would make the installation the most powerful hydroelectric power station in Europe with an estimated annual output of nearly 1,500 GWh, enough to power 400,000 homes.
Posted by John