City of Arts and Sciences, Valencia

The city of "Valentia", meaning "valour", was founded in 138 BC by the Romans on the site of an old Iberian settlement on the banks of the river Turia. It was, and still is, the largest port on the western Mediterranean. It was under Muslim control for about five centuries until medieval times, which probably explains why the old quarter in the city centre (casco viejo) is the easiest place I've ever known to get lost in, with its mazes of narrow winding streets.
Torres de Serrano 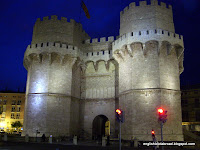 It is now the 3rd biggest city in Spain, with a population of about 800,000. In 1957 the river Turia burst its banks and there was a massive flood, with water up to 5 metres deep in some streets. The decision was made to redirect it from its natural course, passing through the north and east of the city centre, skirting what used to be the old medieval city walls (of which only two towered gates remain), to the west of the city centre.

containing lakes, fountains, football pitches, cafés, climbing walls, an athletics track, a zen garden and a childrens "Gulliver's Park" featuring a huge fibreglass model of Lemuel Gulliver tied to the ground with ropes. The park is a jogging, cycling, or (more my style) walking paradise.

There's plenty of history in this ancient city, including the 13th century Cathedral which houses the Santo Caliz, a 1st-century Middle-Eastern stone cup believed by many to be the Holy Grail. This chalice was used in a mass here by Pope Benedict XVI on the World Day of Families in 2006. Valencia was a great trading city as signified by the magnificent gothic 15th century trading house, La Lonja, 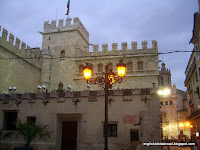 a Unesco World Heritage site.
One of the merchants trading here helped finance the trip to discover the Americas by Cristóbal Colón (Christopher Columbus). Columbus actually thought he was going to find a faster trade route to Asia, but had vastly miscalculated the circumference of the earth, believing that the distance from the Canary Islands west to Japan was a mere 2,300 statute miles of just ocean. 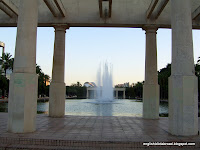 All this history slipped into the shadows for me the first time I walked towards the port end of the river bed. The first glimpse that something spectacular was about to appear was in the photograph on the left. If you click on it to see the large version, in the background is the first part of the "Ciutat de les Arts i les Ciències", the most amazing collection of modern buildings I have ever seen, designed by Valencian architect Santiago Calatrava. 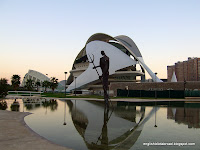 The first building you come across is the Palau de les Arts Reina Sofía. Encompassing 37,000 metres, the roof or "feather" is the most striking part as it is 230 metres long and more than 70 metres high, it just seems to hover over the top of the building. Inside are auditoriums for performing arts, the main one with 1,700 seats is used as Valencia's opera house. 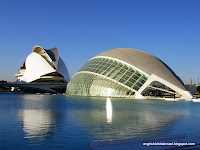 Born 28th July 1951, Santiago Calatrava Valls is an architect, sculptor and structural engineer - a perfect combination for designing innovative buildings that will actually stay up. He bases his designs on his studies of the human body and nature. Spain has an excellent architectural heritage and Calatrava is the latest in a line that includes Antoni Gaudi and Felix Candela (more on him later).

The second building in the sequence is the Hemisfèric, "the eye of wisdom", which looks like a huge eyeball floating above a pool of water. It even has a steel and glass eyelid which can blink using hydraulics. This houses the planetarium and huge Imax theatre of the complex. 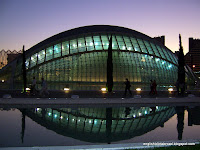 Calatrava is currently constructing, amongst other projects, the new World Trade Center Transportation Hub in New York City and the Chicago Spire which at 2,000 ft (610 metres) will be the highest building in North America upon completion.

The next building in the complex is the Museo de las Ciencias Príncipe Felipe, which some say resembles the skeleton of a prehistoric fish. 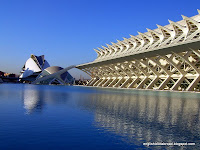 This massive science museum has 42,000 square metres of space on three floors and is 220 metres long.
The top floor contains the "Chromosome Forest", 23 pairs of enormous chromosomes representing human DNA. It is devoted to the fascinating science of the human species and how our bodies work.

On the first floor there is also a 15 metre sculpture representing DNA. 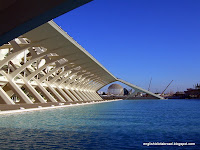 Other exhibitions cover global warming, space missions, and the second floor is devoted to "The Legacy of Science" concentrating on the work of three Nobel prize winners: spain's own Santiago Ramón y Cajal (1906 winner), considered the greatest nueroscientist of all time, who in turn inspired fellow countryman and biochemist, Severo Ochoa (1959) and French immunoligist Jean Dausset (1980). 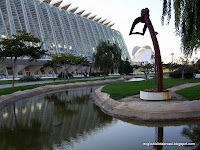 Even the car park is designed by Calatrava and worthy of praise in its own right. Called the Umbracle, the upper part provides a walkway and viewing point for the rest of the buildings, together with a botanical arched garden which also contains contemporary sculptures, mostly by Valencian artists, including "Ex it" by Vincente Orti, signed by Yoko Ono. 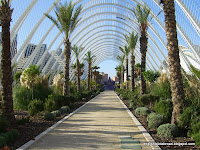 Check out some of Calatrava's other buildings around the world on his official web site.

To get to the next part of this futuristic "city" it was necessary to leave the Turia river bed due to a construction site for Calatrava's next masterpiece, the Puente de l'Assut de l'Or (bridge), which would become the tallest construction in Valencia when complete at 125 metres, and the Ágora tennis centre. Unfortunately these had not been built when I was there, so I don't have any pictures. 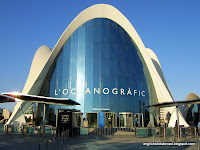 The next and final part of the "Ciudad de las Artes y las Ciencias" is Europe's larget aquarium L'Oceanogràfic. The entrance building immediately engages the senses because of its spectacular shell like concrete roof, more innovative architecture, but this time designed by the late Felix Candela. Born in Madrid in 1910, Félix Candela Outeriño was a graduate of "La Escuela Superior de Arquitectura", but then cut short studies in Germany to return to Spain in 1936 to fight against Franco in the Spanish civil war. Unfortunately, he was captured and put in the Perpignan concentration camp, and expelled to Mexico when the war ended and Franco was in charge. 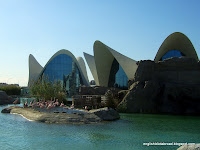 He then did hundreds of projects there, including many public builldings and played a key role in the development of Mexican architecture. His major contribution to structural engineering was the development of thin shells made out of reinforced concrete, as can be seen here on the roof of the underwater restaurant. 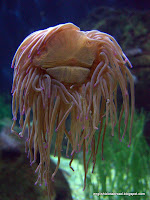 The Oceanográfico contains tens of thousands of examples from 500 different species of the world’s main marine ecosystems. Different massive tanks and open areas represent the Mediterranean, Wetlands, Temperate and Tropical Seas, Oceans, the Antarctic, the Arctic Islands, and the Red Sea. Viewing tunnels run through the different areas, up to 75 metres long, where one can watch the aquatic animals swimming all around, including beluga whales, walruses, sea lions, seals, penguins, turtles, sharks, rays, sawfish, jellyfish, and starfish. 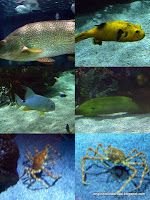 They even have sleepovers for children in the tunnels, which is pretty cool. Photographs with flash were not permitted inside the aquarium areas (although some unfeeling woman busily took them when I was there, despite constant reminders over the tannoy system in her language, Spanish, and in English). The pictures you see here had to be dramatically enhanced using image software. The best way for me to capture the grace and splendour of the marine life was to take video clips, which I have edited into a film presentation. 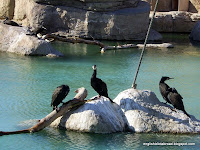 Above sea level there are also examples of wetland bird species such as those inhabiting the Albufera to the south of the city, as well as cormorants, flamingos and a temperate mesh dome containing some very exotic birds.

I'm not really a fan of animals in cages or fish in tanks as they are not in their natural environment. 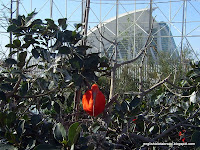 They should be in the oceans, which are almost infinite, especially when compared to the size of artificial tanks. During my stay in Valencia a beluga whale baby, whose birth in captivity was a european first, died due to the inability of its immature mother, Yulka, to feed it properly, which was very sad.
Having said that, in the natural environment the mortality rate of first born belugas is over 50 percent. I felt most sad for the walruses, constantly circling in their tank, with their tusks, normally at least a metre long, cut short and capped with metal, as you can see in the film.

Make up your own mind while watching my YouTube video below. It's like having a giant fish tank or aquarium on your desktop! There are also many more pictures from my extensive travels in Spain after Valencia, which I have yet to write about in this blog, including Murcia, Andalucia, Extremadura, Galicia, Asturias and the stunning Picos de Europa mountains. It's accompanied by a fine soundtrack by Leftfield, "Release The Pressure".