After a longer than expected walk at Skelbo and driving many miles heading towards Loch Leven, I decided it would be a good idea to stop when I got to Loch Ness. This is the longest and (I think) deepest loch in Scotland, so a good place to explore. Whilst driving along the north edge of the loch I came across the village of Drumnadrochit which looked O.K. - apart from the jokey, Flintstones-like, "Nessie" signs for monster tours! The large hotels looked a bit expensive at the road junction in the centre though, and none of the bars there were open mid-afternoon, so I drove around for a while looking for an open pub. After looking down a few roads I saw a sign by the side of a junction for a sports bar. The good old Johnny method came good again as I asked the locals at the bar for a hotel there, and a local guy actually drove ahead of me to show me the way to a nearby hotel - and what a find it was tucked away where you wouldn't really find it yourself. The Benleva Hotel was an excellent place to stay and very cheap at 25 pounds sterling for a nice room en suite with a cracking hearty breakfast of full Scottish or cereals and, of course, porridge. 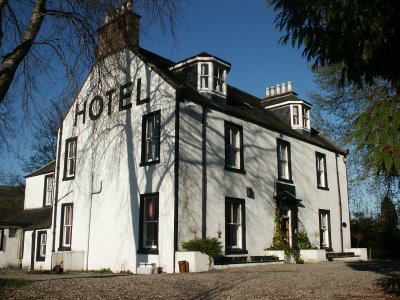 The bar stocks excellent real ales from the highlands, usually with at least one Isle of Skye brew which is lovely stuff. The Benleva was voted the CAMRA Highlands & Islands Pub of the Year 2005, for the second time in three years. The owners started having an annual beer festival a few years ago and this is now the largest in the Highlands, boasting over 50 cask conditioned ales and ciders last year. The next one is 22 to 30 September 2006 and I hope to be there if I'm in the UK then. The bar meals are delicious as well, ranging from traditional Scots fayre to more fancy stuff. You get a very friendly welcome from the hotel owners Allan, Steve and James. Brothers Allan and Steve are normally behind the bar and James, the chef, creating culinary delights in the kitchen. I enjoyed my stay here more than any other hotel I can remember. 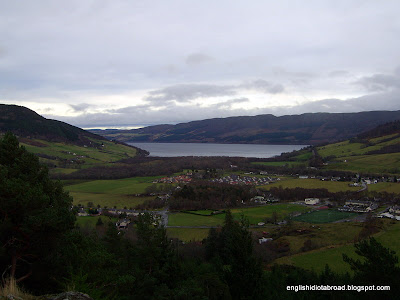 Drumnadrochit and Loch Ness from the woods of Craigmonie and Balmacaan, standing on top of the rocky crag where legend says that the viking prince Monie retreated after a nearby battle. There are supposed to be remains of an iron age fort as well, but they must have been too subtle for me!

There are three 'proper' pubs in the village including The Benleva and they are collectively known locally as "The Triangle". The other two are the Smiddy Bar and the Blarmor Sports Bar. The Sports Bar generally opens later and has a disco at weekends. It was at this disco that I met an Australian guy called Paul who works in Edinburgh. He was partying at Loch Ness for a holiday with his mates and we had a right good laugh - G'day Mondzy! 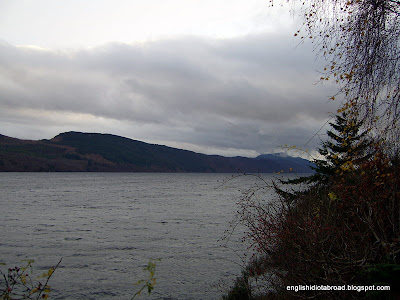 I actually saw the Loch Ness Monster whilst driving along the loch one day, but it had just gone back under the water by the time I could stop and take this picture - darn it!

I enjoyed my time here so much that I decided to stay for the rest of my Scottish trip and not stay in Ballachullish or at Loch Lomond as I had intended to do. I did drive past the invisible Ben Nevis (hidden in the clouds for 9 days out of 10 at this time of year) and had a look where Mum used to stay in Ballachullish and parked up at Kinlochleven to go for a walk in the mountains. The walk starts on part of the West Highland Way and quickly climbs up the north side of Loch Leven. 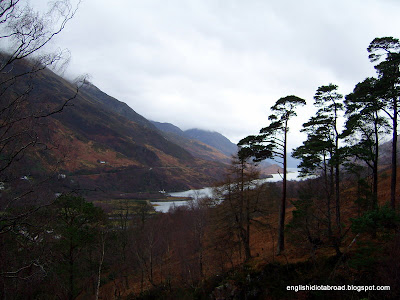 Looking down Loch Leven towards Ballachullish with the Pap of Glencoe to the left.

I had to stop a few times on the way up to look after the old 'ticker' as I wasn't very fit - and look what happened to Robin Cook! 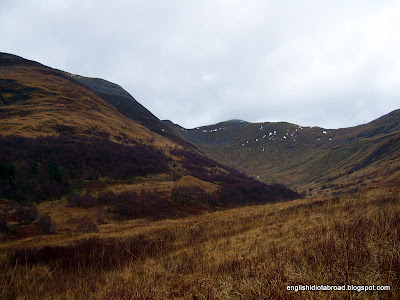 After climbing about 2,000 feet I saw 'Am Bodach' up ahead which rises to 1,005 meters. I decided at this point that the distance I had already climbed was enough! 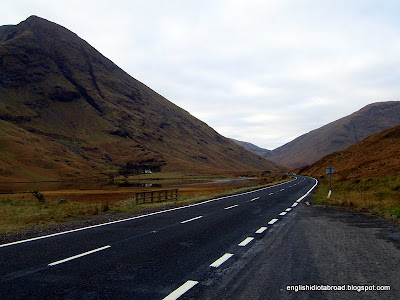 Glencoe - the glen of tranquillity - apart from the A82! A pleasurable drive in the western highlands. It made me forget I still had over 400 miles to drive! 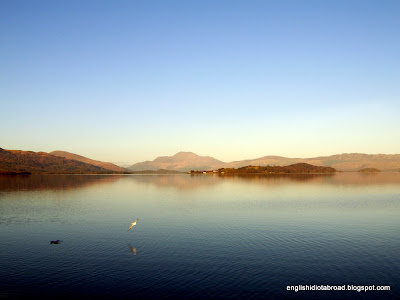 Just couldn't resist a quick stop for chill and photo of Loch Lomond.