Apart from escaping the winter cold of northern Spain, the appeal of the Mediterranean sea, the adventure of discovering a new city and new people, another reason for heading to Valencia was that an American friend I had made in Vitoria, Jarrod,

a musician, was playing on a tour of Spain with his buddies, the legendary Violent Femmes. Check out Jarrod's website here where you can download some of his music for free.

He played saxophone and washboard for the ever changing backing

group, the Horns of Dilemma, which on this European tour included legendary sax player, Dick Parry(both are pictured left, in the background), who played on various albums and tours with Pink Floyd, including their biggest selling album, Dark Side of the Moon.

As you will know if you have read other parts of this blog, I love taking photographs, so had my camera to hand.

When I took the first picture of the Femmes, a security person came and told me they were not allowed. I said "but, I'm an amigo of the band", showing her my after show pass, but was still told they are not allowed by order of the band. Other people put their cameras away, but for the purposes of this blog, I carried on taking them. I don't know if I've broken some kind of copyright here, I probably have, but I'm telling the story of my travels, so be it..... 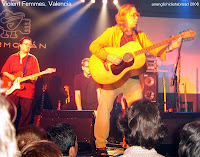 Formed in 1980 by Brian Ritchie(pictured left with his trademark acoustic bass guitar) and percussionist Victor DeLorenzo(pictured above). In 1981 Gordon Gano joined as singer/songwriter and guitarist. They were discovered by The Pretenders in 1981 as they were busking outside the Oriental Theatre in Milwaukee, and Chrissie Hynde invited them on stage to play an acoustic set. They released their first and best selling album,

The Violent Femmes in 1982. Their music on this album is referred to on Wikipedia as "an innovative combination of American folk music and punk rock", coined as "folk-punk". They were never a big commercial success, the album taking ten years to go platinum. I'm ashamed to say that I had not actually heard of them before, so thanks to my old mate James for sending me this album so I could gen up before the gig. They played most songs from this record, so I could sing along and get into the atmosphere. I had presumed the gig would be full of middle-aged fans like myself, but there were a large number of youngsters there, showing how timeless their music is.

Other Horns of Dilemma members included John Sparrow on Cajun, a percussion box from Peru, and Dr Eugene Chadbourne, below playing one of his homemade instruments.

If you look on their official website or the Violent Femmes Wikipedia entry, there is no announcement that they have split up, but I don't think they will be seen on stage together again.

Brian was enraged that Gano and the publishing record company allowed the song "Blister in the Sun" to be used for a burger chain commercial, as quoted on their Wikipedia entry, he said "when you see dubious or in this case disgusting uses of our music you can thank the greed, insensitivity and poor taste of Gordon Gano, it is his karma that he lost his songwriting ability many years ago, probably due to his own lack of self-respect as his willingness to prostitute our songs demonstrates". Ritchie filed a lawsuit against Gano in 2007, asking for half ownership of their music and access to royalty accounting. The only gigs they did after that were U.S. ones that had already been committed to.

After they finished their set and were shifting their equipment, I, followed by a couple of ex-pats living in Valencia, headed upstairs to a bar area for the after show party, and in typical "Idiot Abroad" style, ended up at the wrong one! We walked into the party of Scottish indie rock band Arab Strap, the support group. We were greeted by the question "Who the f*ck are you?" by the singer/keyboardist, Aidan Moffat, to which my Irish friend responded "who the f*ck are you?" and I added "we're the gatecrashers"- and we were "in".

The band was splitting up and this was their farewell tour, and you could see why. When we turned up one of them was behind the bar, helping himself, so we ordered our drinks from him. He was soon to be thrown out from behind the bar when he started rolling a joint there. After this Moffat, and other founder member Malcolm Middleton, started fighting and throwing whatever was at hand, (mainly large Valencian oranges) at each other, which I found most entertaining. It ended in tears though, when Moffat lunged with a lit candle towards Middleton, causing the hot wax to hit his face. The feeling of burning on your face is a little frightening, especially as he didn't actually know what it was. After the entertainment I went downstairs to find the Femmes party which had finished! I was in time to get a lift into the centre in their bus for a few beers though.
Posted by John