As reported in previous posts every city and town in Spain has one big fiesta spanning several days where the partying just doesn't let up, day and night. 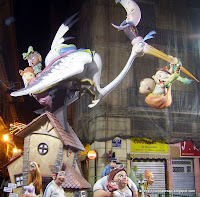 Spanish festivals don't get much bigger than the 'Falles de València', 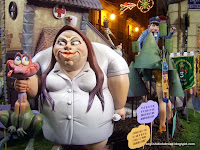 a true pyrotechnic's paradise where each neighbourhood of the city painstakingly builds papier-mâché and cardboard caricatures, 'ninots', which are mounted on huge displays.

Every plaza in and around the city has a falla. There are hundreds of them, but the most amazing part of all is that they are all set alight on the final night of the fiesta, 'La Crema'. 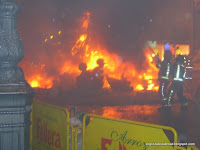 This causes explosive results as they have been stuffed with fireworks! The fire brigade - los bomberos - have to work very hard to prevent damage to the nearby buildings. They are charged with the responsibility of lighting these things and even though they pre-protect some parts with fire resistant material, they have to constantly hose down windows and shutters to stop them melting! 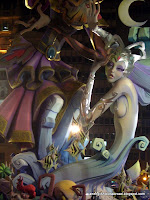 Although the main part of the fiesta lasts for 6 days, preparation takes many months. Almost all year the different barrios or neighbourhoods are planning, designing and building their masterpieces.

The Falla pictured here LA MAR AL VENT by artist Pere Baenas standing at a height of 26 metres cost 200,000 Euros to build, but was by no means the most expensive piece. 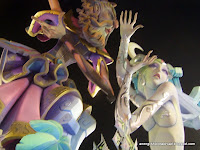 Featuring in the festival's prime spot - the main square, Plaza de Ayuntamiento, it was a homage to the fact that Valencia had successfully won the bid to become the first European city to host the America's Cup that year.

From the beginning of March there are what can only be described as daily synchronised bombing competitions. Although I never visited Beirut during the civil war, every afternoon at 2 p.m. in the main square, one could imagine being in the Lebanese capital at the height of the fighting. 'La mascleta' is like a symphony using only explosions. An example of one of these works can be seen or, more importantly, HEARD below - complete with a decibel reading courtesy of the local TV channel.

Each day a different 'composer' vies to produce the best symphony in order to perform the final Mascleta on 19th March. The performance featured in the video above from 2010 is by Vicente Caballer, the most famous 'pirotécnico' of all.
I was staying in the cheapest and 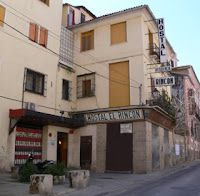 best centrally located pension, Hostal El Rincon, a place very hard to get in, to which I had been several times on foot while visiting a nearby launderette, or 'tie-dye palace' as I referred to it. It was only when I went on my motorbike that I managed to get a small room and then became friends with the owner, Jorge, who nowadays always seems to have space for me when I ring... As this pension is only about half a mile from the Plaza de Ayuntamiento, the Mascleta proved to be a very effective alarm clock for me!

A word of warning for anybody thinking of attending the fiestas without pre-booking accommodation - DON'T DO IT! I made the mistake of assuming that because, as mentioned above, I had 'got in' with the owner of the hotel and had already been staying there for two months, and also assuming they didn't allow future reservations as I couldn't get any before I got to know Jorge. I even persuaded some friends to come over from England for the fiesta, only to find out that all rooms were booked in my hostel. Fortunately I had recently made friends with an eccentric english guy who had a flat in the nearby town of Puçol, so we had a roof over our heads! (See this very same subject covered in a forthcoming post about the carnival in Aguilas, their main fiesta where I ended up sleeping in a cave on a beach for a couple of nights) 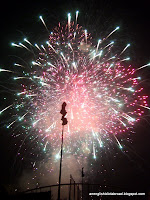 It's not only the Mascleta that uses 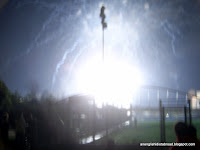 thousands of euros worth of fireworks every day during the fiestas. Each night at 1.00 a.m. there are also firework displays in the old riverbed of the Rio Turia. The highlight of these is known as 'La Nit del Foc' (night of fire) on the 18th March which would certainly put any bonfire night and New Year celebrations I've ever seen to shame. Over four thousand kilos of gunpowder light up the skies as if it were daytime for the estimated half a million assembled spectators. 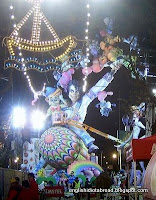 Many of the caricatures of the 'ninots' are parodying famous people, 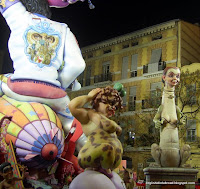 whether they be local, national or international. There were several Michael Jackson effigies in 2007, this one 'Falla Na Jordana' being the largest I saw, entitled I WANT TO BE FREAK. The two lizards on the right are famous Spanish media divas Sara Montiel and Marujita Diaz. The theme of the whole piece is cosmetic surgery and the way people seek to 'enhance' what nature gave them from nip and tuck to penile extensions. A YouTube video of this falla being burned caused quite a controversy online among fans of the singer! It also gives you a feel for what happens on the final night - watch it here. 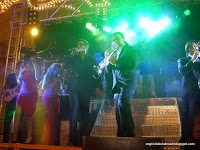 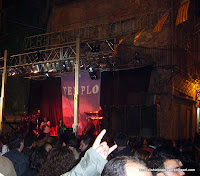 During the main fiestas the whole city turns into a mad 6 day 24 hour party. Temporary stages and bars are erected in whatever space is still available, with a diversity of latino sounds eminating from every direction, bouncing off all the buildings.

With the population of the city more than doubling to around two million people during the fiestas, the smells in the streets can leave a lot to be desired! There are simply not enough 'facilities' to go around with lengthy queues for the toilets (los aseos) in all the bars. 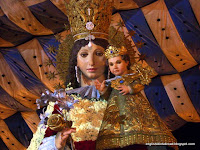 On the 17th and 18th thousands of flowers are brought via endless processions of 'falleras' from all over the region (girls representing the different participating neighbourhoods) dressed in traditional costume, with hairstyles which must have inspired that of Princess Leia in Star Wars).
These offerings are then used to decorate the dress for a massive effigy of 'the virgin of the forsaken', the Virgin Mary, one of the city's patron saints. This is one of the few displays of the fallas which isn't set fire to! 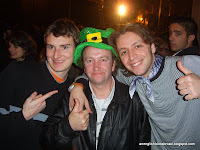 However much I loved the partying of the Fallas there was one small drawback for me. Ever since I've been old enough to drink I have celebrated St. Patrick's day because it is so close to my birthday. I was born at half past midnight on the 18th March and my Mum always told me that if I'd have come along a little earlier, I would have been called Patrick. Paddy's night has always been a big party for me, but all the celebrations for Las Fallas kind of put the famous Irish celebrations in the shade. I can reveal as a stop press item as I am currently staying in Wales that ..... 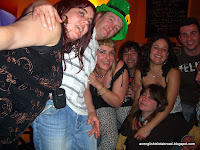 St. Patrick was actually Welsh! At least that's what a guy told me in a pub in Bangor the other day. He was apparently captured by Irish pirates and enslaved as a teenager!

My favourite bar in Valencia, The Lounge, although not an Irish themed pub is run by Fiona from Dublin and sells Guinness, so I was able to celebrate, but it wasn't quite the same as in other cities. I did meet some friendly basque girls to party with though :-)
Posted by John