The cities and towns in Spain have many fiestas, but each one has one big blow-out which overshadows the others, in honour of the city's patron saint. As in Zaragoza, the patron saint of this city is the Virgin Mary, "la Virgen Blanca". In Vitoria-Gasteiz, normally a very relaxed and tranquil city, everyone really lets their hair down for Las Fiestas de la Virgen, a six day continuous party spanning the entire city.

During the festivities there are many street processions, dancers, musicians, live statues, free concerts and bullfights. 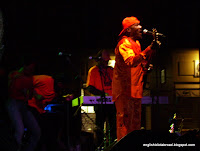 The partying starts the night before, and in 2006 the legendary Jamaican reggae star Jimmy Cliff performed a concert in Plaza del Los Fueros. Although his opening words, "Hola España!", could have been better chosen here in the centre of the Basque Country, his later shouts to the effect of "Bush and Blair no war in Iraq" went down a storm. 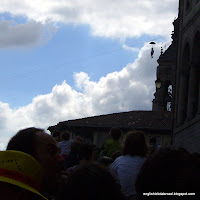 The fiesta officially kicks off on 4th August at 6 p.m. when the mayor fires el chupinazo ("the bang", using rocket fireworks). This initiates the release of Celedón, an effigy holding an umbrella, who descends on wires from a church tower high above the main square, Plaza de la Virgen Blanca, reminiscent of Mary Poppins!
At the same time, thousands of people in the square light up a big cigar(puro) and pop open a bottle of Cava, spraying it into the air. 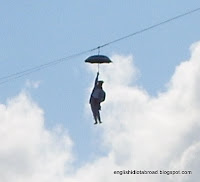 Approximately 20,000 puros and 30,000 bottles of Cava are lit/opened at this point.(The wearing of old clothes is thoroughly recommended for this stage of the proceedings!)

Several minutes later, after passing over the huge crowd of revelers(approximately 40,000 people), Celedón enters a balcony window at the bottom of the square, and then a man dressed identically appears at the window and leaps into the crowd, in true Benny Hill style! 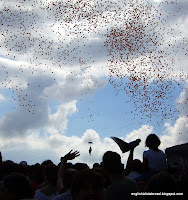 The descent of Celedón has been used to open the fiesta since 1957, started by a group of Vitorian "blusas" and popularly believed to be in memory of, and to pay homage to, the villager Celedonio Alzola, from nearby Zalduondo. This affectionate character, born in 1796, used to travel to the fiestas every year and became a protagonist, promoting them with his affable personality. However, the song verse that is sung on his descent and throughout the fiestas "Celedón, ha hecho una casa nueva. Celedón, con ventana y balcón" was actually composed for Celedonio Iturralde, from Andagoia, by his friend from the Carlist Wars, Vitoria's organist, Pedro Fernández. 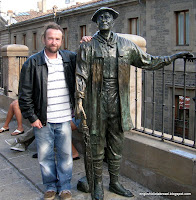 I would say, after getting the local opinion here, that the best way to look at Celedón is as a legend, an emblem or symbol representing good will and affection, all that is good about Vitoria-Gasteiz and its' region, Alava.

This statue of Celedón, erected in 2005, from what I've seen, must be one of the most hugged(by children and adults alike) and patted statues in the world! (photograph taken in 2007) 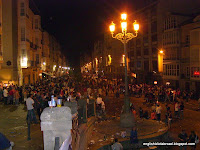 Now the fiesta really gets going, and there's no let up. The normally generous opening hours seem to be thrown out of the window for 6 days. I took this picture at around 5 a.m., a couple of days into the fiestas. An army of 200 workers and volunteers are at hand: firemen, medical staff and cleaning services(very necessary!). 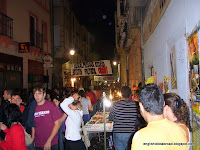 Calle Cuchilleria, 5:10 a.m. The banner you can see is in the Basque language Euskara, "euskal presoak etxera" means "imprisoned Basques home" referring to political members of E.T.A. in different Spanish prisons up to 1,000 km away from their familes, and "estatus politikoa orain!" means "political status now!" for these prisoners. Banners and graffiti of this kind can always be seen in the old town, especially on this street, along with photos of the prisoners. 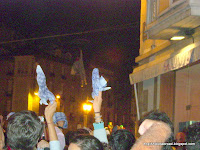 Brass bands march through the streets every morning to wake up anyone who's managed to get any sleep, then the partying begins all over again. After six days of this, with much regret(and probably relief), at midnight on the 9th, the people wave goodbye to Celedón who rises up from the main plaza, back to the church bell tower. This is when the people untie the blue and white handkerchiefs which have been worn around their necks throughout the fiestas

Two and a half hours later, you'd presume not much would be happening, but us die-hard party people headed to the university area where there were live bands, discos, bars, food etc. for the rest of the morning. As you can see from this photo with an old toreador, I just couldn't bring myself to remove the handkerchief! 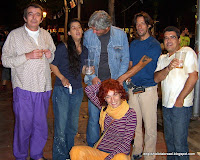 The party crew on this evening: my mate from Sarajevo, Hardi, and some of my Basque buddies, Zuriñe, Karlos, Kaldi, José and Amaia.


Indie Basque metal band, Muted, pictured below, were rocking the place, check out their myspace profile to hear some of their songs. 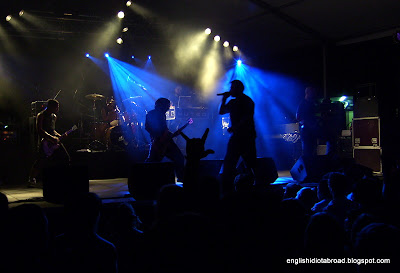