Bars, Music and Food in Vitoria 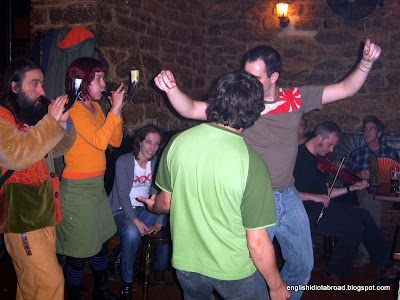 Weekly Basque music and dancing night in Bar Segundo
There are many good bars in Vitoria-Gasteiz, most of them being in the old town. My favourite tipple is red wine, and the average price for a small glass of the local red, being the excellent Rioja Alavesa, is 75 cents! Rioja is the most famous red wine region in Spain. This price is for wine "del año" or "joven", which means it's been aged in an oak barrel for less than a year, and probably bottled within the last year.

You can also buy the crianza, which has been aged for a minimum of two years, at least one year in oak. This costs about twice the price and 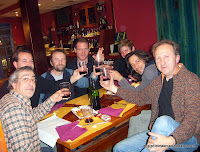 comes in a "copa" (glass with a stem), rather than the standard glasses as pictured here in bar
La Riojana.
In this picture we got a "lock in" as a couple of my biker friends had escaped the inclement English weather for a late-november blast, so they opened the kitchen for us. The bar is always lined with plates of mouth-watering tapas, or as they're called in Basque "pintxos".

Another great bar for tapas is Txistu, where I would recommend the nice portion of king prawns you can enjoy very cheaply. The Irish coffee in here is excellent, and not the normal Spanish version you will see in the guide books which has iced cream in it. It is made by mixing some sugar and plenty of Irish whiskey in a metal jug. This is heated to a very high temperature using steam from the coffee machine, then set fire to. Whilst it's burning the coffee is prepared. These are then mixed and poured into a small glass and the cream added to the top. The result looks like a mini pint of Guinness and is absolutely delicious. (When I go back there next month I will attempt to video the lovely Susana making one of these, and include this here). 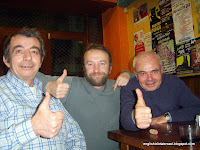 the best bocadillos (sandwiches in Spanish A.K.A. French bread), especially the freshly cooked tortillas with various fillings, and the "pollo completo" (minced chicken with bacon, lettuce and mayonnaise) is definitely worth a try. Their Patatas Bravas (deep fried chunks of potato with all-i-olli(garlic and olive oil), and spicy tomato sauces) are renowned here.
The food is served right up to midnight, which is when you'd normally find me and my mate Hardi, although sharing a bottle of wine with him involves having to drink pretty fast! They have a good music selection in here with some of the best Spanish groups, and it becomes a disco bar by midnight on Friday and Saturday, more popular with the young folk.

A great bar on the end of Calle Cuchilleria as you enter the old town is referred to as The Red Bar. This is because it doesn't have a name and the window frames are painted red! It is run by two brothers, one of which, Edu(pictured here), likes practicing his 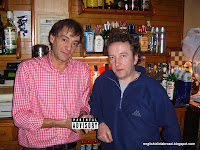 very poor
English on me, saying things like "one wine red" when I walk in.
He plays some good chilled music, the "Buddha Bar" CD's being among his favourites. Vitoria is a very laid back city, so much so that I keep expecting to bump into the Fabulous Furry Freak Brothers or Cheech and Chong sat outside a bar here.

One thing you will immediately notice 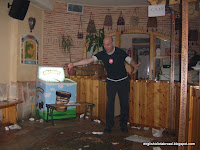 about most Spanish bars is how filthy they appear. Although there may sometimes be ashtrays and bins around, everyone just throws rubbish and fag-ends on the floor. I really got into the spirit of this quite quickly, but it is a difficult concept to grasp for other foreigners that I have met. Here's my American mate Jarrod demonstrating his disdain in bar Boca a Boca, the best place for kebabs in Vitoria.

One of the best pints of Guinness in town can be found in another pub with no official name, The New Bar, where owner Miguel provides a very good American and English rock music selection. 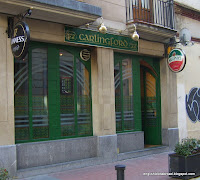 There are so-called "Irish" bars in the newer part of the city which sell Guinness, but the only true Irish bar in Vitoria is Bar Carlingford. Here the owners Pól, from Dublin, and his wife, Leyre, serve up excellent pints of Guinness and Murphys, which are shipped over from Dublin - unlike the Guinness in the southern costas of Spain which is brewed in Nigeria! 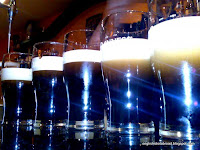 The bar has it's own football team Carlingford Celtic which is made up of Basque, Spanish, English, Irish, Scottish and Canadian players, reflecting the truly international clientele of this friendly pub, which is a must visit for expats.

My favourite bar for brunch and to while way the afternoons and early evenings is Bar Gora. It has very tasty pintxos, especially the large tortillas with fillings like spinach and a tasty layer on top of tuna or mushrooms or ham with mayonnaise - delicious! There is free WiFi here which is very useful for a travelling blogger.

I was in there one evening on my laptop when I overheard English being spoken by some young lads on the next table(not only English, but northern English as well). 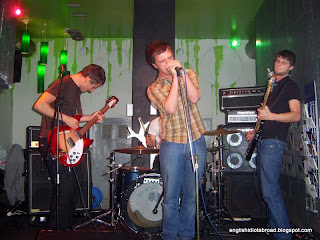 This is unusual in Vitoria so I asked where they were from. They replied "Sunderland", so, after the normal football team chat(my town's team is Blackburn Rovers), I asked what they were doing here and they said "we're the band".

This is how I came to meet up-and-coming young indie group THIS AINT VEGAS. Their gig at a bigger venue in town had been cancelled, so they found this smaller venue the night before, which was lucky for me. I hadn't heard their music before, but really enjoyed their set. Check out their Myspace page here. They even burned me a demo CD of their next single "Shortterm:longterm" which was released the following month.
After we had been nicely fed courtesy of the bar, I had a chance to show them a few bars and get suitably wrecked - rock and roll style :) Cheers guys, and good luck!

Other bars worthy of a mention for free WiFi are Hala Bedi, which also has it's own radio station, tasty pintxos and good menus in the evening. Out of the old town, head for Bar Pura Vida. 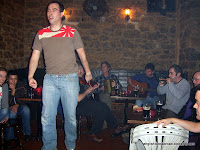 On an otherwise quiet Monday night, the bar to head for is Bar Segundo (yes, another bar with no name!), which is the second bar along Calle Cuchilleria, where they usually have live Basque folk music and dancing. Some of the music, and especially the dancing, is a little reminiscent of Celtic music (see future posts on Galicia and Asturias for more on the Celts). They have the high leaps, as seen to the right, and a trick where they place a glass of wine on the floor and attempt to jump onto the edges of the glass with both feet and balance for a second. If they don't break the glass or spill the wine, they get a round of applause and triumphantly down the contents.

The guy on guitar is singer-songwriter Mikel Urdangarin, a very nice guy who is based in Vitoria. 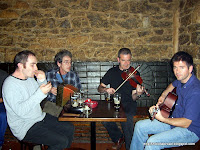 He has produced several albums and his music is very relaxing, almost melancholy. You can listen to some of it through his YouTube space here, although it's in the Basque language, Euskara(which pre-dates all the surrounding Indo-European languages, thus sounding pretty alien), it's very soothing and the perfect antedote to a stressful day! I only recognise the odd word, such as "maite" (love). There's a short biography (in English) on his website, and on the englishpen site, which also has a translation of one of his songs "Hauskor" (Fragile) into English, although I'm not convinced on it's accuracy. 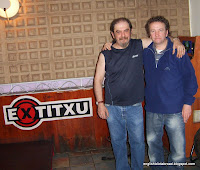 One of my favourite haunts, especially at the end of the night when the other bars are closing, is Extitxu. Peci gives you a hard time if you enter when the shutters are half closed, but is a great bloke. He has the best, or at least most diverse music collection in town. For example, one night I was in there and heard Peter Murphy's 1989 album "Deep" playing. His former band, Bauhaus, were one of the best, if little-known, gothic bands of the 1980's and their song Bela Lugosi's Dead is a true classic.

Even later revellers head for the infamous El Bodegon, a real bohemian place where you will come across some interesting characters, and a few weirdos as well, but quite harmless. 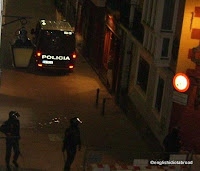 Vitoria is the city I feel most safe in. You do sometimes see police in full riot gear at weekends when the youngsters are out, but pitched battles in the streets between young Basques with separatist tendencies and riot police are, thankfully, quite rare.
The picture to the left (see location) was taken from the balcony of my bedroom on an evening where there was some tension, locals in the street below me were shouting insults at the police who were brandishing tear-gas guns and aiming them in our direction. I was shaking as I took this picture and nervously getting ready to dash inside and close the door very quickly if they fired!
Posted by John