Pure Soria - The Realm of Poets 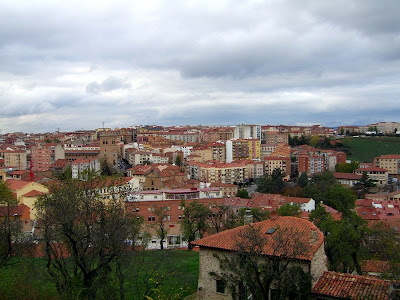 However much I came to love the Basque Country and it's people, it gets blummin' cold there in winter! Possibly due to its' elevation (525 metres above sea level - that's about 1,720 feet to old buggers like me), it gets colder in winter than England does! Regularly below zero in the evening, but there are still more sunny, warmer days. By November I decided to leave. The original plan was to head to Valencia for much warmer climes and the MotoGP races at Cheste, but as the championship was so close between Rossi and Hayden, the national press were advising not to go there if one didn't already have

a ticket, and an important part of my motorcycle was then stolen in Vitoria, meaning I had to wait for new parts to arrive. Instead, here's a photo from my archives of Valentino sporting a one-off Austin Powers paint scheme(Cheste 2003).
Once I had fixed the bike, I looked on the map and a suitable place to stop on the way was a place called Soria. 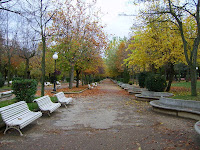 This kept up my(unintentional) record of only staying in provincial capitals, as it is the capital of the small province of Soria in the region of Castilla y León. One of the smallest capitals in Spain, housing about 40,000 people, being 40% of the region's population. This makes Soria one of the least populated areas of Europe and the perfect place to unwind. Well known for it's clean air, thanks to the mass of forests and lack of any heavy industry, it is one of the best almost-forgotten areas in Spain. I intended to stay overnight and found that I had to drag myself away from the place after a week to head south for some warmth, as Soria is more than 1,000 meteres above sea level on the high Spanish northern plains, known as the "Meseta". If you really want to get away from the rat race, this is the perfect place to do it! 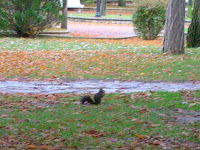 The city's parks are beautiful, and here in Parque Alameda de Cervantes you could easily spend hours in quiet contemplation. You may even have the chance to watch some of the locals(who call the park "La Dehesa" - "The Pasture") feeding the fairly tame red squirrels scurrying around in the trees, while penning your next poem or best-selling novel! Perhaps not surprisingly, it has been home to several famous writers, and is referred to in the tourist literature as "The Poet's Town".

Antonio Machado is the most popular poet in Spain. Born 26th July, 1875 in Sevilla, he lived in Soria for several years and wrote his most acclaimed works here. 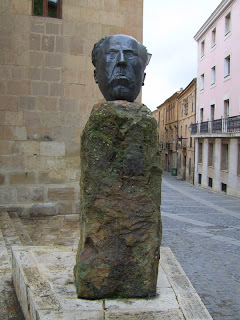 A lyrical poet in a similar vein to Wordsworth. He wrote “Soria fría, Soria pura” (cold Soria, pure Soria), which is certainly true and didn't give me any refuge fom the temperatures I was trying escape, but the clean air was lovely, and bracing! Marchado doesn't look very happy in this statue, possibly due the fact that he's been decpatitated and his body replaced with a lump of stone!
It's actually a sad story, though. He came to Soria to teach French in 1907, and fell in love with his landlord's 13-year-old daughter, Leonor Izquierdo. They married in 1909, and during these years Machado produced his best work. Sadly, she died in 1912 from tuberculousis.
Here are a few quotes from Machado:
“Travellers, there is no path, paths are made by walking”
“Under all that we think, lives all we believe, like the ultimate veil of our spirits”
“There is no one so bound to his own face that he does not cherish the hope of presenting another to the world”
“Beware of the community in which blasphemy does not exist: underneath, atheism runs rampant”
Other poets of note inspired by the area are Gerardo Diego, and a generation earlier, Gustavo Adolfo Bécquer.

If you're a history fan, then you have many treats in this province, from the many fossilised dinosaur footprints, 140 million years old(not sure how they date these things, as a period of one million years boggles my mind, but it is safe to say 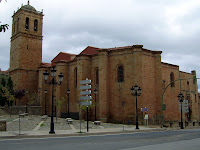 they are very, very old), through Celtiberian villages from 300 BC, one of which, Numancia, bravely held off the Roman armies for 20 years, eventually surrendering by setting fire to the village and killing themselves. There is now a reconstructed home there, so you can see how people lived over 2,000 years ago. Roman architecture abounds, including a unique arch in Medinaceli, as well as the inevitable old Spanish churches, like the Concatedral de San Pedro, with 12th century romanesque columns and arches inside, and renaissance and baroque façades from the 16th and 17th centuries. 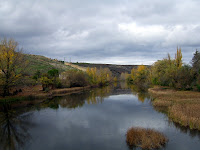 It is the region's scenery that firmly takes centre-stage. The nearby Picos Urbion mountains have a beautiful glacial lake, Laguna Negra(forgot to take my camera when I visited here!), and are the birthplace of the famous Rio Duero. 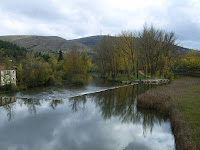 The Rio Duero runs by Soria all the way across northern Spain and in to Portugal to meet the Atlantic Ocean at Porto, 557 miles away. Along the way it irrigates many fine vineyards, producing the excellent Ribera Del Duero red wine, and some fine white wines in Galicia and Portugal, including the exquisite Albariño.

On the food front, the best place I found was called Piscis, on Calle Tejera. They do a great "menu", which is always the most reasonably-priced way to dine in Spain. A menu consists of a generous starter, main course and sweet, with bread and drink included. The normal menu was a mere 9.50€, with a more extravagant version for 16.50€. Those not on a strict travelling-blogger budget could try the house specials: Lomo de Ciervo en Salsa de Hongos y Fóie and Chuletón Trozeado al Barro u Cochinillo Frito. The former means tenderloin of deer in a hongo and foie sauce: foie is pate that is 100% duck's(or sometimes goose's) liver, and hongos literally means fungus,

but in culinary terms refers to a type of mushroom with tubes rather than gills. Mushrooms are much reveered in Spain, where I have seen several newspaper articles about gathering edible ones over the last couple of years. Seta is the word for mushroom and usually refers to the common open cup type. Champiñones are smaller versions of these(button mushrooms). My Basque friend Freddy, a font of all knowledge when it comes to food, or anything else Spanish, drew me some pictures on a serviette(while enjoying a glass of Pacharán Navarrro) to illustrate the differences.
The latter dish translates to a thick steak(on the bone) seared and cooked in a clay dish or a fried suckling pig.
In this photo of the above bar you will notice(as well as the staff being delighted at having their photgraph taken:) the leg of the ubiquitous Spanish ham, Jamon Serrano. 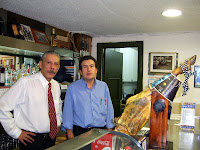 I'd read about it's fine flavour in my guidebooks, but the first time I tried it was in a bocadillo in Zaragoza, with salad and chicken. Because it's not cooked it can be hard to chew, especially the fat, so trying to take a bite out of the sandwhich caused the whole slice of ham and most of the other contents to come out! I used to say "call me old-fashioned, but I prefer my meat cooked" and was definitely not a fan. However, when I later tried the quality stuff whilst in the Basque country, I was an immediate convert and now love it. It varies widely in quality, as can be seen in supermarkets that have many legs hanging in the aisles. You can buy one for as little as thirty euros, or pay over two hundred. Jamon Serrano is from standard pigs, but the ultimate in ham, Jamon Iberico, is from Iberian pigs which roam free eating natural foods and look like a cross between a pig and a wild boar.
If you would like to visit Soria, it is about 150 miles from Bilbao, 130 from Vallodolid, and 100 miles from Zaragoza, all of which have airports where budget airlines operate.
Posted by John