Leaving Zaragoza was as much of a pain as arriving, carrying all my luggage to the bike in the extreme heat of the afternoon, in my leathers! Once eventually out of the city traffic and on the open road, it was OK, and I plumped for motorways to reduce the journey time. Once I had entered the Basque country, it was noticeably cooler, and I nearly stopped to put my extra jacket on!

I arrived in Vitoria-Gasteiz (Vitoria being the Spanish name, and Gasteiz, Basque) by early evening and glanced at one of the roadside temperature gauges/clocks, which are a common sight in Spain. It was only showing 22ºC, which caused a loud cheer inside my helmet! This was half the temperature that was regularly reached in Zaragoza. 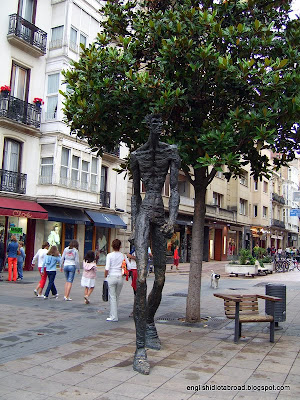 I had decided on one of the cheapest city centre pensions in the Rough Guide, which was in the old town. It took me a while to navigate the obligatory one-way system, with several roads not accessible, but I was helped by a friendly local.

This was the first picture I took in Vitoria-Gasteiz.

They have strange inhabitants here!

This guy was out walking his dog.

You can understand that I got right out of the way pretty quickly after taking this photo!

This statue is called "el caminante" (the walker or hiker) by Juan José Eguizábal.

Like all Spanish cities I've been to, the heart of the modern city of Vitoria-Gasteiz is centred around the old town, with it's narrow cobbled streets, and virtually totally pedestrianised. The bars around the old quarter are very lively, and stay open late. My intention in coming here was to be able to commute to Pamplona for a day, and enjoy the fiesta San Fermin. However, "El enciero", the running of the bulls, starts at 8 a.m. each day, so to be able to get a vantage point, the train I would need to get from Vitoria left at 6 a.m.

As I was out until 3 every morning getting to know

this new city, alas, I never made it to Pamplona. My new Kiwi mate, Sean, was partying there for several days, though, and he will hopefully write an entry for this blog, telling us all about it!

He flew back to Newcastle (where he is currently working), from Vitoria, so we had a chance to meet up before he left. He was extremely knackered, and had clearly enjoyed the festivities to the full! 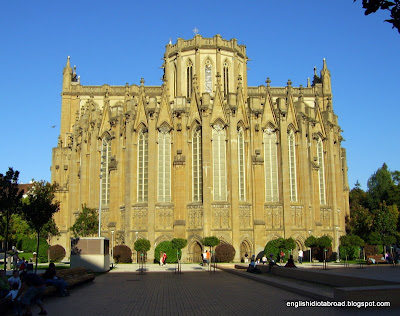 The "new" cathedral in Vitoria-Gasteiz, built in the early 20th century, so, very new by Spanish religious buildings standards!

The Pension I found was excellent, a larger room than the one in Zaragoza, with a double bed and sink, and very clean. Pension Eguileta was superb value for a hotel in Vitoria at €20 a night.
Posted by John