The first bar I made my local was Harry Macnamara's on calle Mendez Nuñez which was just around the corner from my hotel. They do a decent "desayuno" (breakfast) deal consisting of juice, toast with butter and marmalade, and coffee for 2.25€. They keep serving this into the afternoon which is handy for late-night revellers like myself! The staff here are very friendly, but you need to be able to speak some castellano (spanish) in order to get what you want. Watch out for my future blog, "English Idiot Guide to Spanish" to find why it is better to refer to the spanish language as castellano, rather than español, when in Spain. Despite the bar's name and the above logo, it is a spanish bar. The only scottish touch being a tartan tam o'shante and scarf on the spanish beer pump! Apparently the barmaids used to wear short tartan skirts but, alas not any more. However, here's how it might have looked if I'd have been there in 2004.......

The local beer here is Ambar, which you can get on draught in this bar. It's brewed in Zaragoza and quite nice.

Nobody spoke english in the bar so it was a bit of a challenge to order anything other than wine or beer, even when I asked for a "café con leche", I got blank looks. Pronunciation is the key thing here, and mine wasn't good enough at this stage. I met one guy, Joaquín, who could speak english and he "took me under his wing" and tried to help me learn. 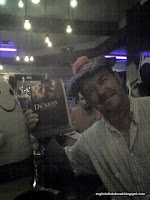 He drank a lot of a spanish liqueur called Pacharán. It's very popular in Spain and very nice, if a little sweet. It originated in Navarra in the Basque Country as a home-made drink(it's Basque name is Patxaran). When I was later in Vitoria-Gasteiz and took a basque girl out on my bike, we were walking in the country and came across some blackthorn bushes, she immediately started fervently picking the sloe berries so she could make some Patxaran. It is made by soaking the berries in anisette, with a few coffee beans and a vanilla pod, for several months.

Joaquín shattered my illusions of being able to speak spanish fluently within a few months, and told me it would take a couple of years! I now reckon he was right too.

The bar has a big screen for major sports events, which was handy as the world cup was on when I was there. The relaxed atmosphere meant it was the place where I would watch several games, particularly when Spain or a south american team were playing. As for England games, see my next posts on "Irish" bars in Zaragoza, where ex-pats and native english speakers are normally to be found.

An extra treat for any fans of the cult Australian drama "Prisoner Cell Block H" out there, the lady who runs the bar is a dead ringer for Miss Ferguson!